You are here: Home > All News > Committee News > Christian Life & Growth > What is the Church Called to be Doing Today?

What is the Church Called to be Doing Today? 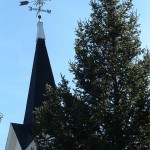 Valentine’s Day morning I sat in a circle one of fifteen church-folk from across the Maritimes. As often happens as gatherings like that begin the convener asked us to take some time to be silent and to ponder a question, the one she gave us was “What is the Church called to be doing today?”

After several minutes of silent listening we were invited to begin sharing what each of us had heard. Sometimes I’m surprised by what I hear the Spirit say in those times of silence. Here’s what I heard that day about what the Church is called to do in our times: “We’re called to listen to, and discern among, the voices of those who sit in, but also apart from, our circle and most especially to the voices of the many who stand outside.”

As Church in a changing world, we often bemoan the fact that no one’s listening to us anymore. Is that because long ago we forgot that we are called to listen?

Which leaves me wondering why I’m writing (and you’re reading) this guest sermon? Based on the ‘guest sermons’ others have written (and I’ve read) over the years I’d say each writer wants to share Good News. The irony is that those who most need hear the invitation to live in God’s life-transforming love, are the least likely to turn to this page or read this column today or any other Saturday. Have we forgotten that the best invitation is “a listening ear”?

John’s Good News tells us that the Word became flesh, lived among us, full of grace and truth, and, that from that fullness we have all received grace upon grace (see John 1.14-16). The Word made flesh didn’t just talk to us, still less at us, the Word lived among us. So, it’s no accident that John is also the gospel of intimate conversation. Jesus heard people into God’s love.

Jesus listened to Nicodemus a community leader share his self-doubt, confusion, sense of personal inadequacy. All of it coming from the deep places within him.  Jesus listened to the Samaritan woman – someone who stood well outside the circle – talk through her marginalization and her mistakes.  He listened so well as she shared from her deep places, that she knew he understood “everything she’d ever done”. She also knew that he understood all that had been done to her. Jesus listened. His listening was his love, and his love his listening.

Today people like Nicodemus and the Samaritan woman still need to be heard as they speak from their deepest places. They long for someone to listen to them with respect and love. We’re not very good at that. The list of those we’ve failed to hear is long. So too is the list of those we’ve actively silenced.

Paul asked the Church in Philippi (Philippians 2.1-11) not to look after their own interests but to the interests of others. He told them that they should have the same way of thinking and the same attitude of relating in them as was in Jesus – a way and an attitude characterized by humility and vulnerability. Those qualities, humility and vulnerability, are essential to good listening – life affirming, life transforming listening.

These are uncertain times for the Church; though, some may loudly argue that they’re not. In times like these it’s easy to feel threatened. From outside and from within our relevance, our purpose, our very existence, is called into question. An era which calls us to listen humbly, also asks that we allow what we hear to convict and wound us. Of course, we may choose a different response – to shout louder still, drowning out all voices but our own. It is time, once again, for us to ask ourselves about our true calling – and not just our selves, those outside our circle too.

In a 2010 Ted talk on vulnerability http://www.ted.com/talks/lang/en/brene_brown_on_vulnerability.html Brené Brown said that when we feel vulnerable:

“We make everything that’s uncertain certain. Religion has gone from a belief in faith and mystery to a belief in certainty. I’m right, you’re wrong. Shut up. That’s it. Just certain. The more afraid we are, the more vulnerable we are, the more afraid we are. This is what politics looks like today. There is no discourse anymore. There is no conversation. There’s just blame.”

It’s time for us to shoulder the blame. Time, too, to stop blaming others. That’s going to require a humility which is as patient and as faithful as it is deep – the attitude that was in Jesus.

The reality is that we’ll have to wait – without losing hope and without jumping to false ‘in-your-face-certainty’ – until those we’ve driven away by our words and our actions – however well intentioned –  and everyone we categorize and demonize even now,  hear and believe our silence.

They, not we, will decide when we’re ready to listen. They are the ones who will judge when our silence is attentive, respectful, trustworthy, and humble. Then, and only then, will they say the things they need to speak, the things we need to hear.