Conferences, reports were heard by various committees including Social Service and Evangelism, the Home Mission Committee, and the Settlement Committee. Highlighting some of the social issues prevalent in the minds of many Canadian citizens, the Social Service and Evangelism report touched on issues such as gambling, prohibition and rum-running, enforcement of the Lord’s Day Act, and an end to “industrial difficulties (Minutes of the First Maritime Conference, 1925,  p. 22). The standing committees of Conference at this time were:  the Widows’ and Orphan’s Fund, Trustees of Hunter Church Building Fund, Trustees Church and Manse Fund, Trustees Presbyterian Church, Historical Committee, Visitors to Mt. Allison, Committee on Religious Education, Conference Programme, Camp Meeting, Church raise, and Obituary Notices.

The Conference ended with everyone joining in to sing “Blest be the Tie that Binds;” a fitting end for a huge milestone in our Conference history. 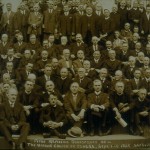 Attendees of the first Maritime Conference, 1925