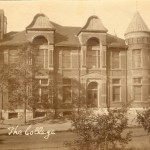 After church union in 1925, the Presbyterian College was amalgamated with the Methodist theology department of Mount Allison University and was renamed the Theological College of the United Church of Canada, Halifax. In 1927, the Board decided on Pine Hill Divinity Hall as the name of the new theological college which was created by an act of Parliament in 1930. The College granted the degrees of Bachelor of Theology, Bachelor of Divinity, Master of Divinity, and Master of Theology as well as the honorary degree of Doctor of Divinity. The College also held a Lay Supply Summer School for a number of years after 1962.

In the 1971, the College merged with the Divinity Faculty of the University of King’s College (the Anglican Church of Canada) and Holy Heart Theological Institute (The Roman Catholic Episcopal Corporation of Halifax) to become the Atlantic School of Theology.

From information compiled by Judith Colwell