You are here: Home > Blogs > Under the Heat of Nicaragua’s Sun

Under the Heat of Nicaragua’s Sun

Under the Heat of Nicaragua’s Sun 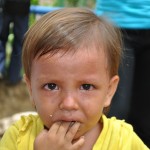 The sun shone down on my tired jet-lagged body as I stood in the earthquake-ravished revolutionary square of Nicaragua’s capital city, Managua. The birds in the tropical trees above squawked as if competing with each other to be the loudest. Several street vendors sauntered about trying to make a sale and our program coordinator Gonzalo Duarte of volunteer-tourism company Los Companeros was giving a brief history lesson of this complex nation.

Overwhelmed with the day, I stood absorbing as much of the situation I could. The smoky scent of the nearby landfill was wafting through the heavy-humid air and filled my senses. The smooth-flowing rhythmic beat of the Spanish language created a sense of white noise in the background and I found myself becoming lost in the moment. Several hours earlier we had landed in this country not knowing quite what to expect. A year and a half of planning had led
us to this tropical place but all the planning in the world wouldn’t have been enough to help me process that first full day in Nicaragua.

The child, no more than three, stood motionless as he curiously examined our group of teenagers, young- adults and young-at-heart adults with his complex eyes. Quietly he grasped his mother’s hand and trusted her lead as they prodded the crack-scarred streets of the historic city. Clad in nothing more than stained, torn pants and over-walked plastic sandals the toddler followed his mother’s steps towards a street vendor. Reaching deep into her pockets the mother of this toddler, a street vendor herself, produced a few Cordoba; her day’s wage represented by several small coins. The child’s eyes ignited with life and delight crept across his otherwise
expressionless face. He stood in eager anticipation of the cool treat, a simple ice cream cone.

Full of distress knowing she had spent what likely were all her wages on this treat but also full of gladness knowing how happy this would make her child, the mother unwrapped the treat and handed it to her son.

I tried to refocus on my group’s mission to build a classroom and experience this culture. But somehow these two unlikely characters captivated me. I longed to hear the mother’s story, to  exist with her and her son for a short period of time and I longed for simplicity and peace for her and her family. With the realization that I could offer no answers to this mother and her child I prepared to let them both walk from my reality and into their own; but they did not leave me, they forever changed me.

With a moment of near precision the ice-cream wielding toddler toppled to the ground and he, along with the cherished ice-cream, landed on the cobbled streets of Managua.

The moment in which I was immersed was pierced by the cries of an inconsolable child. The birds hushed their song, the sun went behind a cloud and the moment vanished. The joy of the
mother was melting under the imposing sun as her hard-earned wages lay in a heap of melting ice-cream. The joy of the child was spewed on the pavement, soon to be trampled upon by
vendors selling their wares and wandering people searching for answers. In a scurried movement seemingly inspired by embarrassment the mother scooped her child to his feet and he remained weeping with a pool of ice-cream growing around his dirt-caked feet.

The cries of the child penetrated my heart and I too stood weeping on that same street corner. Suddenly I was not the person who was brave enough to travel all this distance to work for two weeks but rather I was a mere child weeping as my perception of western-culture melted around my feet. The simple ice cream cone, the child’s temporary joy, was gone in a flash and my enjoyment of sunshine, a history lesson and foreign sounds was also gone.

It was only appropriate that our group at that moment progressed with our tour and left the mother and child. The family, the image of melted ice-cream and the sounds of a crying child
that spoke directly to me did not leave my reality: I left theirs. The simple melting treat, lost joy and experienced pain of the mother and her child are still present, and I am not. My satisfaction in simple indulgences also melted on the streets of Nicaragua, my over-consuming materialistic ways lay in a heap on that street.

The reality of my worldview came crashing down with the child’s ice-cream. I stood for a few moments weeping for the great injustices of our world. The two characters left with their struggles and I left, leaving my heart exposed and melting.