“There’s a fever here” remarked a sophomore Berwick camper when asked what he thought of Berwicking. “I came reluctantly last year (just to please my wife). No coaxing was necessary this year, even our teenagers were counting the days prior to the opening on July 26.”

“There’s a fever here.” He repeated. “…Here we are, just halfway through this encampment and already looking forward to next year.”

A delegate to the School for United Church Women is returning with her family next year for the full ten days.

Freshmen as well as veteran campers referred to the “fever” which seemed to dominate at the 97th annual Berwick Camp. The inaugural meeting of the Association, held on the camp grounds on July 31, was forced to consider expansion of facilities to accommodate increasing attendance. A mid-week day census revealed that 613 persons were on the grounds.

Rev. Parker Matheson of Liverpool, secretary of the association, said 40 families, comprising 187 persons, occupied the tenting and trailer grounds this year. It is expected that expansion of this popular area will be made before next year.

Seventy cottages were occupied by 305 people, 8 apartment units had 49, and the dormitories housed 72.” 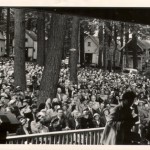