You are here: Home > Blogs > Even More General Council Reflections

Our General Council Commissioners offer reflections on their experience.

What part of General Council did you like best?

I really like being able to experience the wider community of the UCC. It is amazing to sit at table, either in the court, in the dining hall or at a picnic park and be in conversation with other UCC people from the length and breadth of Canada. That’s when I really do know “We are not alone” in the simplest form.

What part of General Council was the most important?

I believe the debate around Israel and Palestine was the most important part for me. It was a time and place where I was very much aware that we are a church filled with a passion for being in right relationship with the human component of Creation. Of course there was also the pipeline issue in my commission where we heard the importance of and passion for protecting the environment.

What part of General Council moved you in a special way?

There were times in worship when I was moved to tears. That so many people can be together at such intimate levels is extremely moving. Our table group was particularly cohesive, loving and caring. In fact, we were honoured to be the table group which served as an incubator from which the newest moderator was hatched. What an emotional time was that installation!! Phew!!

What part of General Council could you leave out and still have everything you needed!

I would have left out some of the wordsmithing and unnecessary rhetoric on the floor of the court in Plenary and Commons and in Commissions as well. I believe Jane Johnson brought a good practice to Maritime Conference with the random drawing of names of presbyteries to line up and wait your turn to speak. This year at Marconf AGM I found people more intentional about their speak, rather than jumping up on a whim, they took time waiting and thinking about their turn. This could happen at GC as it is relatively the same size, if not a tad smaller.

1. What part of General Council did you like best? The sense of who we are as a national church: intercultural, Francophone [loved all the use of French this week], overseas personnel and global partners, All Native Circle Conference and Aboriginal Council, differently-abled as well as temporarily able-bodied, increasing level of safety for all sexual orientations and genders, and the wonderful presence  and witness of many youth and young adults.

. What part of General Council was the most important? The courageous and caring work we did to make faithful and just decisions, even if it might cost us- and the prayer and music and preaching which supported and grounded us in our work.

3. What part of General Council moved you in a special way?  The hospitality and spiritual gifts of our First Nations commissioners and guests, reflected in the courageous words of leading elder Lorna Standingready, and the beautiful worship service the First Nations commissioners offered us on Friday: Amazing Grace will never be the same for me after singing it in Cree , hands joined with everyone else around the room.

4. What part of General Council could you leave out and still have everything you needed!  I found it all worthwhile: I didn’t want to miss a thing. 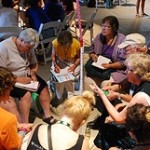 (1.)          The part I liked best: being part of small groups – especially the Table Group – so I got to know others in a personal way as we shared the experiences of the week. I also liked the music, prayerfulness and theological reflections by “pop-up prophets”.

(2.)          The part that was most important: being able to discuss and make decisions on sensitive, controversial, but urgent justice and peace issues – such as re Israel-Palestine – as we sought to be faithful and to speak in a prophetic way in the world today.

(3.)          The part that moved me in a special way: the presentation by Cindy Blackstock and the children re the on-going injustices and challenges facing Canada’s Aboriginal children, families and communities.

1. The music and worship were fantastic and I believe brought out what was common amongst us as Commissioners.

2. The most important part ( for me ) was acceptance of the proposals that will move our church forward and address the issues that need to be considered.

3. The work that has been done with our Aboriginal partners and their heartfelt participation throughout the week was very moving and special.

4. There was a considerable amount of micromanaging and wordsmithing of proposals that did not add substance to them and could easily have been left out without changing the results, 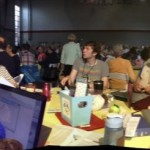 What part of General Council did you like best? The community building and experiences of worship.  There is something so viscerally powerful about 300+ people singing songs of praise and action! an

What part of General Council was the most important? Hearing the report of the Truth and Reconciliation Commission and the Native Ministries Council and making the decision to amend the preface to the Manual and change the crest in a way the reflects the inclusion of First Nations within the United Church of Canada.  The Open Space time and the conversation I hosted around Prison Ministry was foundational for me – reminding me that there are folk in the United Church for whom the work I and others do is vital to the health of our communities – and that there are people who want to be involved.

What part of General Council moved you in a special way? See above #2.  Some of the stories that were shared were deeply touching.  The Feast and Worship Service that surrounded the signing of the Covenant was most moving!

What part of General Council could you leave out and still have everything you needed!