You are here: Home > All News > Committee News > Archives Committee > Patching Up The Old

Patching Up The Old 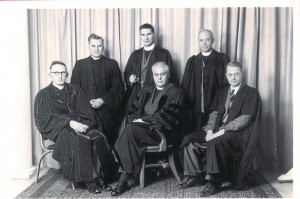 Pine Hall Faculty, 1953. Herman Campbell is the first from the left in the back row.

Herman E. Campbell (1898-1987) was born in Portapique, Nova Scotia on 14 June 1898. He was educated in Colchester County schools; Dalhousie University; and Pine Hall Divinity Hall. On June 8, 1924, he became the last person ordained by the Presbyterian Synod of Nova Scotia prior to church union. Following ordination, he served the pastoral charges at Ingonish; Merigomish, New Glasgow: Trinity United Church; Stewiacke; and Brunswick Street United Church, Halifax. He also served in the Sussex and Bathurst pastoral charges in New Brunswick.

Rev. Campbell served as a private in World War I and was awarded the Military Medal for bravery in the field. During World War II, he served overseas as a director of YMCA War Services.

Rev. Campbell was greatly involved in Christian education work during his ministry and lectured on this topic at Pine Hill. He was granted an Honorary D.D. from Pine Hill in 1957. He retired in 1961 and passed away on July 6, 1987 in Halifax.

Below is an excerpt from a sermon he preached at Brunswick Street United Church, Halifax on February 5, 1950:

Patching Up the Old (abridged)

Mark 2: 21 No man seweth a piece of new cloth on an old garment.

“…Now, I hold the strong opinion that as a people and as a Church we have been doing too much patching. We patch up the home situation: we put patches over the breaches in the Church – : We put flimsy patches on the international fabric, when we should be started with the foundations or weaving it new.

…It is my forthright conviction-which I shall again repeat that our day needs, as nothing else – a new beginning.

…Consider the international field. Four years of patching – or attempted patching of the international highway has landed us in a bog that apparently is bottomless. A realistic look at the situation reveals the woeful fact that four years of negotiations have not produced peace, but mounting tensions, unsettled conditions, frustration and despair in the hearts of whole nations. Starvation diet continues, acres of rubble remain untouched, homes are not rebuilt, because despair and hopelessness gnaw at the hearts of people…

Christianity must implement its tenets: it must be willing to get out of its old ruts or it will be eliminated by the tides of time. Leaders in every walk of life are aware, I believe, of the necessity of making a new start….

….We are all children of life, children of God. By inheritance, we are the product of many generations and the heirs of the ages: by the right of contributions we are the responsible rightful custodians of the present and the makers of the future. As children of God, we are duty bound to utilize all in the past that is vital and worthy, and, as followers of One who came to be the Inaugurator of a new age, and who shewed to man a new and living way, we must be ever open-minded, ready to blaze new trails, to tear down the old scaffolding and erect the new that shall the more readily meet the needs of an ever-needy present.”