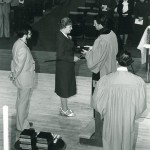 Installation of Polly Ervin as President of Maritime Conference, May 25,1980

Polly Ervin was born in Lunenburg County, Nova Scotia. She married Rod Ervin in Halifax and they eventually moved to Moncton in 1956. Polly was active in the UCW,  serving as UCW president for her local church from 1964-1965 and 1982-1983. She was president of Chignecto UCW Presbyterial from 1971-1973. Polly was also Chair of Chignecto Presbytery for two terms and a member of the Conference executive and sub-executive at various times.

Polly was heavily involved in her community, serving as a volunteer at the Moncton Hospital and a member of the Board of Trustees of the Drew Home for Senior Citizens in Sackville, NB among many other activities and positions. 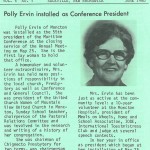