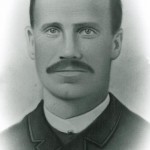 William John McKenzie was born on July 15, 1861 at South Side West Bay, Cape Breton, Nova Scotia. He was the third child of Robert McKenzie and Flora MacRae.

According to an anonymous biographer, William “grew to be of great stature, a man of 6’3’’ tall and of unusual physical strength. Mentally he was much above the average.” After attending a small country school, William obtained his license as a teacher at the age of 14 and taught in schools in the area until he was 19.

Around this time, William decided to dedicate his life in service to God. To prepare for this, he began studying Latin and Greek with his minister at Black River.

From 1880-1883, he attended Pictou Academy. After graduating, MacKenzie taught for one year and then enrolled in Dalhousie College, now Dalhousie University. His studies were interrupted for a time due to ill health and he spent a summer at sea doing business in the West Indies. He was eventually able to return to Dalhousie and graduated with an Arts degree in 1888.

According to one of his diaries, while on the ship from Halifax to Labrador, MacKenzie read a book on Korea which got him interested in working in that country.

After graduation, he was sent by the Missionary Association of Students to do mission work in Labrador. He left for Labrador on May 10, 1888 and served there for 16 months. 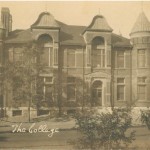 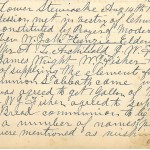 Minutes of the meeting of Lower Stewiacke Presbyterian Session at which the new minister, MacKenzie, served as chair, August 14, 1891

Upon his return to Halifax, McKenzie obtained a degree in Divinity from the Presbyterian College in April 1891. He took some medical courses in his last year to prepare him for his work as a missionary. He was licensed to preach by the Presbytery of Halifax in 1891 and ordained and inducted at Lower Stewiacke on May 26, 1891 (now St. Andrew’s United).

During this time, MacKenzie was planning to go to Korea. However, the Presbyterian Church in Canada did not think there were sufficient funds to send him. He was advised to choose another country to work in or to go to Korea through the Presbyterian Church in the United States. MacKenzie was adamant, however, that he should represent Canada in Korea and started to try to raise funds for his trip.

After resigning at the church at Stewiacke in 1893, he was appointed to a mission in Halifax. During this time he received donations from members of the Presbyterian Church in Nova Scotia and he eventually had enough funds to travel to Korea.

MacKenzie began his journey in October 1893, traveling by train to Vancouver. He landed in Yokahama, Japan on November 27, stopping at Tokyo and Kobe to meet with other missionaries. 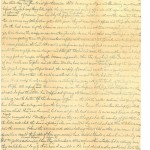 Finally, on December 12, he sighted Korea. Upon landing in Korea, he started taking language lessons and spent time with other missionaries as well as securing the services of a language teacher and a servant. On February 5, 1894, he officially began his work in the town of Sorai. While here, he lead bible studies, visited homes, and preached. 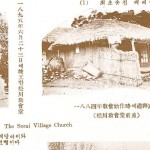 Attendance at his Sunday services gradually increased and he soon started planning for the erection of a church building. By March 1, 1895, construction on a new church had begun. The church was finished and the first service was held on June 9 with 80 people attending. The second service saw 97 people in attendance. That same week, McKenzie became ill and he passed away on June 21, 1895. 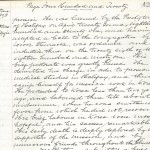 Excerpt of obituary for William MacKenzie in the Presbyterian Synod Minutes, October 3, 1895

By clicking on the links below, you can read the diary of William MacKenzie (May 1894-June 1895) which he kept while in Korea.