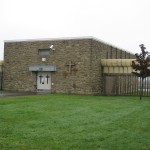 By action of the Maritime Conference Executive, a letter was recently sent to the Honorable Vic Toews expressing concern about recent cuts to prison chaplaincy in Canada. You can read the letter by clicking on the link below:

The letter was also copied to the Prime Minister along with Members of Parliament from within the bounds of Maritime Conference.

UPDATE: On November 15, 2012, MP Peter Stoffer called the Conference Office, thanking us for our letter and indicating his own disappointment with the actions of the government.