Robert Galbraith Vans was born in Wightonshire, Scotland, in 1844. At one time he considered doing mission service in Spain but began work in Scotland instead after studying under the Rev. Dr. Somerville of Glasgow. Rev. Vans moved to Canada in 1884 and ministered within the Maritimes for 9 years. He was ordained on February 16, 1892 at St. George, New Brunswick in the St. John Presbytery of The Presbyterian Church in Canada and inducted into the congregation at Buctouche, NB on April 8, 1896. In 1905, Rev. Vans was stationed at East Calgary and by 1907, Rev. Vans had moved to the Presbytery of Kamloops, BC and served various pastorates there, retiring in 1911. He passed away on March 10, 1925 in Vernon, BC. According to an obituary, Rev. Vans “possessed a beautiful voice, and his musical gift was a great asset to his work. He also had a wonderful power in prayer, in which he and his audience seemed to be brought very near to the Eternal Presence (1).” He was also apparently well known for his proficiency at the game of croquet and was an avid bee-keeper (2). 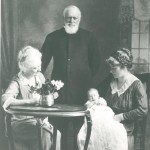 Rev. Robert Galbraith Vans with his eldest daughter, Mary Cuthbert, his grand-daughter Elizabeth Bingley, and his great-grandson George Bingley, 1921 at Vernon, BC