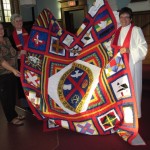 Truro Presbytery, the oldest presbytery in Canada, celebrated its 225th Anniversary on October 23, 2011 at First United Church in Truro.  A commemorative quilt was made and auctioned off.

Truro Presbytery first convened on August 2, 1786 at First Presbyterian Church, Truro.  Rev. Daniel Cock was appointed Moderator and Rev. David Smith was appointed Clerk.  The Presbytery was convened because of a growing population, new communities, and the clergy’s need to have more support and communication.

This first century saw the Presbytery struggle with issues such as member discipline, increasing numbers of pastoral charges, and a lack of clergy. Towards the end of the century they were more organized and able to routinely evaluate the clergy and the charges’ books.

Truro Presbytery celebrated its 100th Anniversary on August 1, 1886.  A history was prepared and read from the pulpit of all the churches.

The second century encompassed two World Wars and the Great Depression, which took their toll on society.   Truro Presbytery met the challenges by continuing to grow and diversify.  Sunday Schools and Womens Groups were initiated.  Social justice issues came to the fore.  Memorials, resolutions, and petitions were sent to various levels of government regarding liquour-related activities, gambling legislation, and unemployment.  Women began to take on leadership roles.  The first woman named chair of Truro Presbytery was Mrs. (Irene) James Teed in 1966.

Since 1986, Truro Presbytery has continued to evolve to meet the needs of the pastoral charges, Conference and General Council. Their current mandate can be found in an online document entitled This is Truro Presbytery. They have embraced the computer age with a website, wikisite, and e-mail. They continue to have a commitment to social justice issues and Christian education.