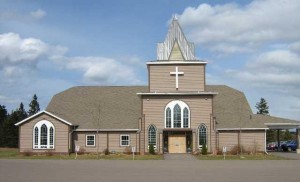 The Rev Barbara Wagner notes that a building committee did careful research to ensure, for example, that the building could be expanded easily.  She notes that the Sunday school has doubled in size so the space issue will need to be addressed soon.

In the spirit of compromise and helping the four congregations to feel at home, all chancel furniture from the previous buildings was used in some way but chairs are used instead of pews to make the worship place multi-functional.

During construction, the building committee, meeting three or four nights a week, paid very close attention to costs.   Volunteer labour was utilized where it was possible.   Those who could not swing a hammer or paintbrush brought food to the site to feed the crew.

Many non-attendees and people outside of the church also participated in the project. For example, the paving contractor agreed to a three-year interest free payment plan and memorial donations of specific items such as office furniture were received.

While some people decided they could not continue with the congregation, new families have begun to attend and some who left when “their” church was decommissioned are back now that everyone is in the new building.

To help pay the bills the congregation has six major fundraisers a year with a team based approach ensuring a shared workload and guarding against burnout of individual members.

When asked how four congregations were able to come together as one so well, Wagner cites the power of prayer.   Printed prayers seeking God’s guidance and direction were distributed to the congregation and this proved to be critical to the support received for going ahead with the building project which drew from the past but looked to the future.