You are here: Home > All News > Notices > Jessie MacLeod Honoured 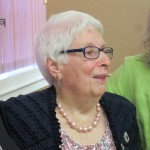 On May 2, at the national gathering of Diaconal Ministers of the United Church of Canada held recently in Tatamagouche, NS, Jessie MacLeod was honoured as a Companion of the Centre for Christian Studies(CCS).

Wherever she has lived, Jessie MacLeod’s ministry of justice making and her extension of hospitality serve as major themes, and have earned her the affectionate, if unofficial, title: “Diaconal minister extraordinaire.”

Throughout her career, Jessie knew firsthand the treatment of deaconesses/diaconal ministers as “second class” ministers, but with subversive humour and commitment, Jessie confronted these attitudes with creativity and enabled others to reflect upon their faith and work in an effective, interdependent, relational and supportive way.

Jessie is a lifelong learner. Jessie graduated from the United Church Training School in 1950 and, at the same time, obtained her BA degree from Victoria College. In 1952, she was designated a Deaconess. In 1959 she received her Masters of Religious Studies from Union Seminary College, New York and, in 1994, was awarded a honourary Doctor of Divinity degree from the Atlantic School of Theology, Halifax, NS for her distinguished service to the church, community and beyond her denomination and community.

Whether in congregations, as Conference staff, university, theological school, or Church House, Jessie lived out the concepts of justice, faith and compassion, enabling everyone to “find their voice.”

The Centre for Christian Studies is pleased to honour Jessie MacLeod as one of the 2013 Companions of the Centre. 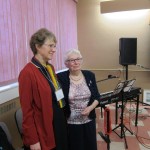 Jessie MacLeod and Principal of CCS, Maylanne Maybee, May 2013