You are here: Home > Blogs > Room at the Inn

Room at the Inn 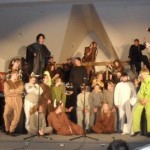 A month ago Lutheran Pastor Todd Mattson was pulling out what was left of his 53 year old hair. His ecumenical youth theatre group was about to set out on a 15-day tour of the Northeast United States and the Canadian Maritimes and he had one very large hole in his schedule. There was no venue in the city the participants were most excited to see, Halifax.

Pastor Mattson sent emails to the regional bodies of the Lutheran, Anglican and United Churches. After several cycles of emails went unanswered one man felt the call to hospitality. Henry Ellsworth is a retired Meteorologist living in Bedford, commuting each Sunday to St. Luke’s United Church in Tantallon where he serves as Council Chair. As the Treasurer of the regional United Church body known as Presbytery Henry was receiving all of the plaintiff emails from Pastor Mattson and knew St. Luke’s had the capacity and heart to respond.

A self-described “detail person” Henry contacted the Minister at the church, the Council members and energetic volunteers at the church to see if there was a willingness to welcome the Minnesota theatre group. Within 48 hours Henry had volunteers for set up of the church on Friday, June 21st, a supper put on by Charlie and Jean O’Handley, desserts by the Nicholoadians (theatre company at St. Nicholas Anglican Church in Tantallon), and a full breakfast offered by MJ Laing and Angela MacLean.

The Minnesota theatre group, called “New Wine”, consists of 60 youth and 7 adult leaders. At the mid-point of the 2013 summer tour New Wine had played to an average audience of 15 at local churches and hospitality had consisted of space on church floors for sleeping bags. Thanks to the generous article that appeared in the Masthead News awareness of the musical was high in the Bay area resulting in a crowd of 105 to see and hear “The Ark”, a script that addresses how people work together to solve the challenges of community and celebrate diversity.

One challenge remained. These 67 Minnesotans had been on the road for 2 days straight without access to showers. St. Margaret’s Centre General Manager Mike Leroux made 67 new friends when he offered New Wine use of the showers at the Centre. After breakfast and showers New Wine walked the Halifax waterfront and toured Peggy’s Cove before hitting the road for their next stop, Lunenburg.

With little sleep over the weekend Henry Ellsworth treated himself to a rare nap on Sunday afternoon. “It was a great experience for me and all of St. Luke’s”, said Ellsworth. 67 Minnesotans left the St. Margaret’s Bay area with nothing but warm memories. Apparently there is always lots of room at the Inn!