Situated in a grove of hemlock trees in the Annapolis Valley town of Berwick, NS, Berwick Camp has been offering campers a unique experience for 142 years.  As the result of a devastating storm in December of 2010, during which hundreds of massive hemlock trees fell, destroying cabins, and the electrical and water systems, the future of the camp was in peril.

Despite the destruction, the decision was made that Camp in 2011 would indeed take place; tears were dried and people began to plan and work. Thousands of hours later, with thanks to many donations, insurance money, paid and donated labour, and a team that could stretch both to their limits, the camp did open that July and has every summer since.

While the camp program has always depended on its volunteers, during the “re-build” phase, campers also held numerous fundraising events in their home communities and volunteered many hours at the camp ensure the goal was realized.

Heavily damaged by the falling trees, two favourite cottages have been rebuilt. The UCW Cookie Cottage is again open to conduct its ministry of hospitality and the Polka-Dot Cottage, with a new multi-coloured roof, is once again guiding children to their VBS sessions.  All damaged or destroyed cottages are back in place and a new “radio station” has replaced the speakers in the trees for those who cannot attend the evening services in person. 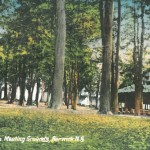 While the newly planted trees will take hundreds of years to reach the size of the ones they replace, in September of 2012 the “rebuild” was declared complete.  A long “to do” list, and a financial campaign, look to the future as the camp seeks to maintain a vital and active ministry to future generations of those who cannot imagine life without a week under the hemlocks.