Summary Report of the Annual Meeting 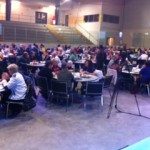 The future of The United Church of Canada was on the minds of delegates to the 89th Annual Meeting of Maritime Conference held at Sackville, NB May 22-25.

The theme ‘Stories of Faith: Telling, Listening, Sharing” enabled individuals to weave stories of faith development into present experience and determination that the United Church story will not end with current crises and doubt about the denomination’s relevance and viability.

The 400 plus delegates, guests, and resource people from the three Maritime Provinces and the Bermuda Synod participated in vibrant worship and the routine business of the annual gathering.  Visitors included the General Council Office representative Erik Mathiesen, the chief financial officer for the church, and Beth Symes, a member of the Comprehensive Review Task group.

The meeting opened with a Service of Remembrance and Thanksgiving Thursday evening where the lives of 50 church folks, both ministers and laypeople, who passed away over the past five years were celebrated.

Friday sessions included the approval of a balanced budget for 2015 made possible by a 2.5% increase in allocations from 2014. This budget features flat staff costs, reduced committee costs, increased revenues through building use, archives rentals and online offerings, and an anticipated reduction in the funds received from General Council.

Proposals brought to the gathering included a motion from St. John’s United Church in Halifax and Halifax Presbytery asking the General Council meeting in Corner Brook Nfld in 2015 to create a formal ritual for blessing children distinct from the sacrament of baptism.  While the court ultimately did not approve the proposal to be passed on to General Council, the discussion appeared to show support for the idea of such blessings, and observed that General Council approval is not required to conduct such blessings.

The Conference did approve a motion directing the Executive Secretary to write to the prime ministers of Canada and Bermuda, ministers of foreign affairs and other politicians requesting that they inquire into military actions of Israel including the death of two Palestinian young men that appear to violate the 4th Geneva Convention.

Presentations were received from the group working on the Affirming initiative for conference, from Atlantic School of Theology, from the Tatamagouche Centre, conference archives, and other committees.

Much discussion time at table groups and plenary sessions was devoted to the work of the General Council Comprehensive Task Group that is charged with marking suggestions for radical change in how the United Church is organized and how it operates.

Using the document Trust God, Trust the Body, which was derived from the earlier, report Fishing on the Other Side, delegates talked about and responded to questions on the suggestions put forward by the task group.  The documents can be viewed through links at the United Church website www.united-church.ca

Later in the meeting the conference voted to establish its own task group to make further suggestions for the consideration of General Council.

Saturday evening was given over to energetic worship from youth forum and intermediates at conference delegates.  Many saw the fact that there were more people at the conference as youth forum and IAC delegates, guests, and leaders than delegates to the annual meeting as a sign of hope. 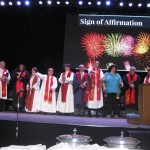 The 90th annual meeting of Maritime Conference is scheduled for May 28-31, 2015 at Sackville, NB.