Nothing beats the advertisements of yesteryear. Long before tv and internet, businesses were getting the word out to potential customers. Granted, their approach was a little different than what we’re used to today but you gotta work with the times. The following were taken from souvenir programmes of the Methodist Conference of NB and PEI (1896) and the Young People’s Society of the Maritimes (1903) which met in Saint John. These two documents can be found in the records of Centenary-Queen Square United Church which are housed in the Archives. 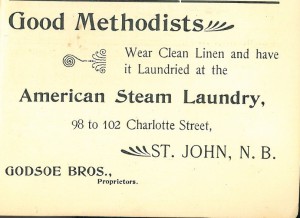 Speaking of linens, does anyone need a suit made of diagonals, venetian, or corkscrew worsted? Don’t forget the 10% discount for all clergymen and their sons. 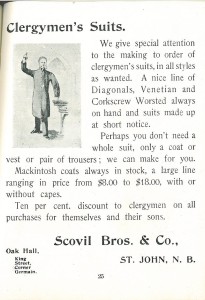 Rosetta Stone, you ain’t got nothing on the International Correspondence School in Saint John. Not only do they offer language courses in French, German, and Spanish for one’s social advancement but they use phonographs of all things as a learning aid. Sign me up or should I say registrieren sie mich! 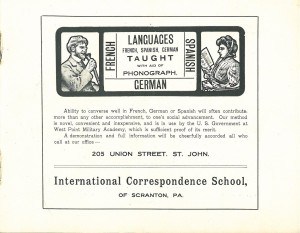 Just like teachers, ministers need to use their voice a lot. Rev. J.J. Teasdale of Centenary Methodist Church (which would later become part of Centenary Queen Square United Church) is no exception. He was so taken with Hawker’s Balsam of Tolu and Wild Cherry that he wanted to shout his story from the rooftops….or at least to the members of the Methodist Conference of New Brunswick and PEI. FYI, according to Wikipedia, tolu is a resin from a tree in South America. I’m thinking the wild cherry was used to mask the taste of that resin! 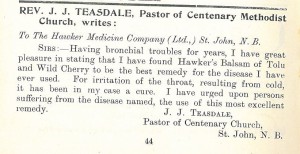 Enough of all of that though, who wants ice cream? It’s a tough call because Langs has a selection of choice ice cream and oysters but Whites has bon bons and caramels and such a pretty interior.  On second thought, why bother putting yourself through the agony of making this decision, hit up both of them! 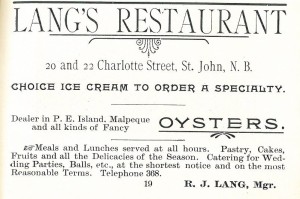 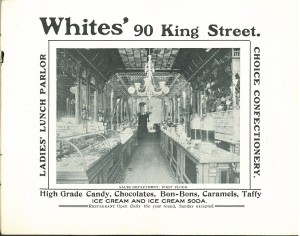