Yesterday at the break table the Maritime Conference staff were having an involved conversation about rhubarb and it inspired me to hunt down a couple rhubarb recipes. These recipes are courtesy of the Dr. Florence Murray UCW Unit which was based at J. Wesley Smith Memorial Church in Halifax. The cookbook isn’t dated but it’s probably from c. 1970s.

I know, I know, you don’t have to remind me, rhubarb season is finished but I’m assuming that everyone has at least one bag of the frozen stuff in their freezer. My only complaint about this cookbook is that there are no recipes combining the deliciousness that is strawberries and rhubarb!

Can’t say I’ve ever tried a rhubarb-pineapple mix but it sounds pretty yummy!

Now we move on to some serious relish:

Finally, as an extra bonus for all those who are under 21 or feel like they are under 21: 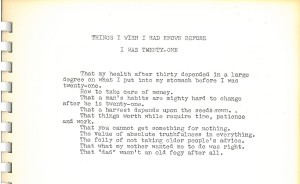