You are here: Home > All News > Committee News > Archives Committee > Difficult to break myself into a habit not acquired early…

Difficult to break myself into a habit not acquired early…

Maybe it’s just me but reading through old diaries is a fun way to while away some time. Not only do you feel like you get to know the diary writer but there’s always a bit of an adrenaline rush from reading what originally not many other people would have had a chance to look at. The Maritime Conference Archives has quite a few diaries from ministers and contrary to what some people may assume, these diaries prove to be an interesting read to say the least.

The following pages are from the diary of one Charles H. Paisley. Straight off the bat, I have to compliment him on his handwriting. It’s actually readable! Here are the basics: Charles Paisley (1843-1908) was born in Fredericton and educated at the University of New Brunswick. He was ordained in 1870 and served at several Methodist circuits in the Maritimes until he became professor and later principal at Mount Allison University. Charles Paisley received a D.D. from Victoria University in 1900. From what I can tell, he was living in the Pugwash area when he wrote these diary entries in August 1867. He certainly has some strong beliefs about the role of women in the church but these would have been commonly held views at the time.

I didn’t mean to leave everyone in suspense about the circus in Pugwash but there’s only so much room. Never fear, you can come view the diary at the Archives if you would like to read more about the circus. And yes, that’s my shameless ploy to get you here! 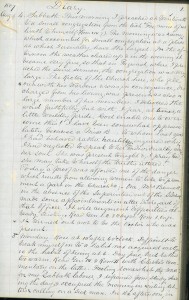 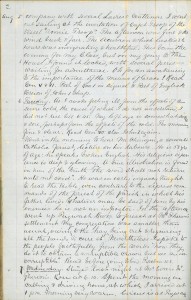