As you may recall, last week I posted a photograph which I said was our only wedding photograph in the Archives. It turns out that I spoke too soon. Just a couple days later, I stumbled across another wedding photograph and it was too nice not to share! The happy occasion took place in San Fernando, Trinidad in 1911. The bride and groom are not specifically identified but it is likely that they are Mr. and Mrs. B.F. Selvon as there is an inscription on the back which reads “From Mr. and Mrs. B.F. Selvon to Mr. and Mrs. R.B. Layton with best wishes.”

Update (June 28, 2016). The following information on the photograph was received from a descendant of Robert Layton. The groom is Bertwyn Fraser Selvon (1889-1951) (a first generation Christian Tamil from Madras, and son of a cocoa merchant), and the bride is Daisy Irene Dickson (ca 1887-1951), whose father was Scottish. Their sixth child (out of seven) was Samuel Dickson Selvon (1923-1994), a well-known novelist. (“Sam Selvon” on Wikipedia). Looks like the groom’s proud father is seated on the left, and the bride’s father is on the right (white person). The date on the reverse is “6-7-11” which is either June or July, 1911. My grandfather arrived back in Halifax on July 27, 1911. 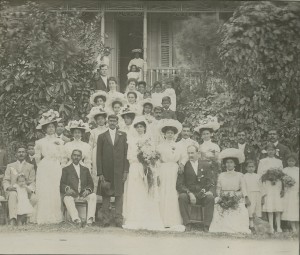 As a side note, according to a label on the front of the photograph, Rev. R.B. and Mrs. Layton are standing on the top step to the left. Robert Blackwood Layton was born on February 13, 1879 in Upper Stewiacke, Nova Scotia. He was ordained as a Presbyterian minister in 1905 and eventually was sent to Trinidad as a missionary in 1909. He had to leave in 1911 due to poor health. If you’re interested in learning more about Robert Layton, we have some of his records here at the Archives.