For a change this month, I thought I would post a menu instead of a recipe. If any of these dishes appeal to you, never fear, the internet will provide you with all the recipes you could possibly want (I already checked). This menu was for a banquet held by the Independent Order of Foresters in Saint John in 1913. In case you’re wondering, the Independent Order of Foresters was a fraternal organization which exists today as the Foresters. I found the menu in some records of St. Andrew’s and St. David’s United Church, perhaps one of the church members also belonged to the Order.

What do you think? Would you pay $1.00 (approximately $24 in today’s dollars) for a ticket to this banquet? I don’t know, the English Plum Pudding sounds awful good but I think I’ll pass on the celery. Although if dinner’s not until 8:30, I’d be hungry enough to eat anything! 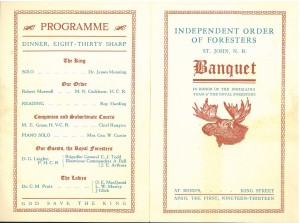 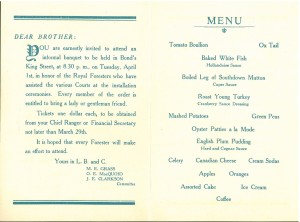