You are here: Home > All News > Committee News > Church In Action > Called to Communion, Committed to Justice

Called to Communion, Committed to Justice 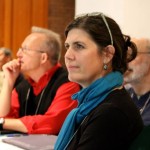 On behalf of the United Church of Canada, Laura Hunter, Maritime Conference Minister for Justice and Stewardship, will be attending a global consultation in celebration of the 10th anniversary of the Accra Confession  in Hannover, Germany, November 2 to 6, 2014. This upcoming dialogue of ecumenical partners is hosted by the World Communion of Reformed Churches (WCRC) .

Ten years ago, in the face of increasing urgency of global economic injustice and ecological destruction, member churches in the World Alliance of Reformed Churches (now WCRC) were challenged to examine our role(s) in these realities. How are we contributing to the injustices and what power might we have to affect positive changes? What theological basis calls us to action? This was at the root of what came to be called “The Accra Confession.” In the United Church of Canada it led us to the work we called “Living Faithfully in the Midst of Empire”.

From the 2004 “Accra Confession”
The General Council commits the World Alliance of Reformed Churches to work together with other communions, the ecumenical community, the community of other faiths, civil movements and people’s movements for a just economy and the integrity of creation and calls upon our member churches to do the same.

Now we proclaim with passion that we will commit ourselves, our time and our energy to changing, renewing and restoring the economy and the earth, choosing life, so that we and our descendants might live (Deut 30.19).

This gathering combines accounting to one another for how we have fulfilled our commitments in the 2004 Accra Confession, with consideration of current challenges and what we are being called to in this time.