The Archives just recently received a cookbook from the Covenanter Church in Grand Pre, Nova Scotia, and it’s got some real gems in it. It’s always hard to choose which recipes to post every month but today the theme is rather unusual but super awesome recipes. Buckle up because it’s going to be a wild ride.

This first recipe just goes to show that Ritz Crackers can make any dish more appetizing. Whether it’s dessert or a main course, these crackers are about as versatile as you can get.

Next up is meat scuffle. I chose it because it has an awesome name and because I’m rather intrigued by the addition of egg whites.

And the best for last! I have only four words for you: Potato. Stuffed. Hot. Dogs. Actually, make that 5 words because I would be remiss if I didn’t say AWESOME! 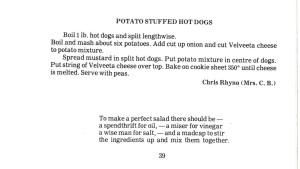