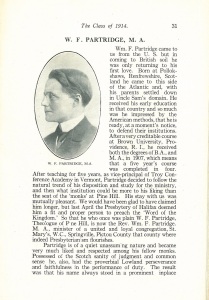 Excerpt on William Partridge from Pine Hill’s “The Theologue,” December 1915

I’ve lost track of the number of times I wished I could go back in time to meet someone whose records we have in the Archives. William Fisher Partridge is one of those people. Just from the little I read about him, it seems like he was a wonderful man and one with many talents which he put to good use for the church. I find that biographies often tend to be quite dry with the listing of names, dates, and places but I hope the records themselves will do a better job of introducing you to William Partridge.

The Rev. William Fisher Partridge was born at Pollockshaws, Scotland on September 11, 1880 to William Partridge and Margaret Morton. He moved with his family to the United States when he was 5 years old. The Partridges ended up settling in Providence, Rhode Island. After completing elementary school, William worked until he was 21 and then completed his high school diploma. He graduated with a Master of Arts in 1907 from Brown University; finishing both his BA and MA in 4  years instead of the usual 5 years. After graduating, William taught for 5 years as vice-principal of Troy Conference Academy in Vermont until a fateful trip to Nova Scotia where Dr. Clarence MacKinnon encouraged him to become a minister of The Presbyterian Church in Canada. He studied at the Presbyterian College in Halifax (Pine Hill) where his talents as a writer came to the forefront winning the Robertston Essay Prize and serving as editor of the Pine Hill publication “The Theologue.” He also won first prize as orator for 1915 at Pine Hill. 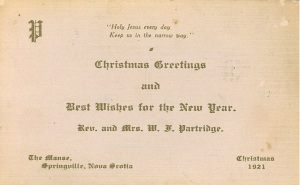 Christmas card from the Partridges, 1921 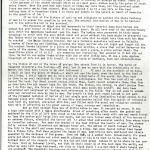 William was ordained by Halifax Presbytery in 1915 and served pastorates in Springville, Pictou County, NS, and St. Peter’s in Cape Breton. While at Springville, he regularly contributed columns to The Presbyterian Witness newspaper. He married Adelaide Fisher on August 29, 1921 in Glenholme, Nova Scotia. She passed away sometime before 1934. William married Louise MacDonald on September 29, 1934 in Fredericton, New Brunswick. 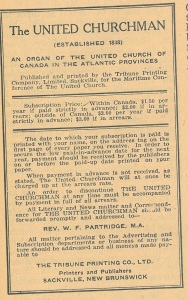 United Churchman ad, December 18, 1929. This was the year Partridge started as editor.

In 1929, William became editor of The United Churchman, a regular periodical published by The Maritime Conference. He carried out this job for 19 years until his retirement in 1948. He passed away suddenly on February 14, 1957 in Sackville, New Brunswick leaving behind his wife, Louise MacDonald.

I’ll sum up with the closing lines of his obituary found in the proceedings of the Maritime Conference of 1957. “Dr. Partridge was a thoroughly good man. He so completely accepted the unenforceable law of goodness as the ruling principle of his life that all his wards and actions bore the rich and rare quality of complete dedication. Humble, yet tenacious of the things he held paramount, he was a true exemplar of the faith he professed.” 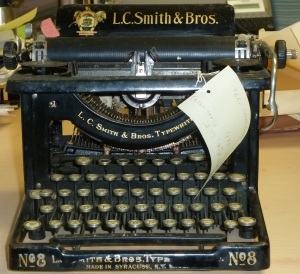