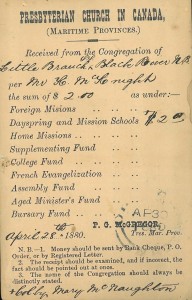 Initially known as Black Brook, Loggieville traces its Presbyterian origins to 1895. In that year local Presbyterians, who had previously been required to attend St. Andrew’s Church in Chatham, decided to form a congregation in their own locale. At a meeting on 27 March 1896 a formal request was made to Miramichi Presbytery to establish a church in the community and on 7 May of that year, permission was granted. In addition to the school house, early services were held at the Temperance Hall until the construction of the Knox Church which was dedicated on 22 May 1904.

For a listing of the Loggieville-Black River Pastoral Charge records held at the Maritime Conference Archives, click here.