You are here: Home > All News > Committee News > Archives Committee > With affectionate regards to Jane and Dear Mother

With affectionate regards to Jane and Dear Mother 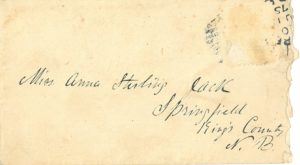 This is Tuesday morning when the great union is to be effected. We are to meet in the skating rink the largest building in Montreal. I was in the rink last Sabbath witnessing a beautiful sight for the whole of the Sabbath School children of Montreal belonging to the Presbyterian Churches met together and I know you would like to be there, it would gladden the heart of Anna Sterling to unite her voice with teachers and children in singing “There is a happy land”-for I am sure there were more than ten thousand present.

We are to meet today in the same place and I am safe to say there will be many thousand present today.

I wrote Saturday that I expected to be at Belle Isle by Wednesday the 23rd. I then apprehended that the train would be stopped on the 19th but I find that in only on the Intercolonial line the road to St. John from the west will be open so then I prefer [illegible] to leave Montreal on Friday 18th and to be at St. John Saturday evening and return to Springfield on Monday the 21st. This is my present purpose and if I should not go that day do not be disappointed. Meet me on Monday at Belle Isle if convenient. That is to say if this reaches you in proper season.

Wanting to meet with you all in the course of a week and with affectionate regards to Jane and dear Mother.