You are here: Home > All News > Committee News > Archives Committee > Banquet in Honor of Cycle Platoon, 1914

Banquet in Honor of Cycle Platoon, 1914

After stumbling across this wonderful photograph, I was lucky enough to find a newspaper article which described the event. I love it when that happens! And yes, I know that makes me a nerdy archivist. 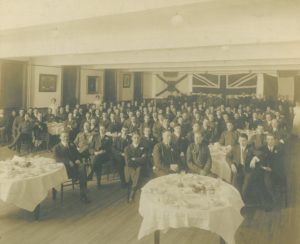 A farewell banquet was given at the Presbyterian College, Pine Hill, Halifax, on Wednesday evening, of last week, to the members of the bicycle corps who are soon to leave for England to receive their training for service in the war in France. A number of these boys are Dalhousie and Pine Hill students and it seemed fitting that they should receive a hearty send-off by their teachers and fellow students. The banquet was given in the new dining room. Principal Mackinnon acted as chairman, and with him at the main table were Professors Kent and Falconer, G.S. Campbell, President A.S. MacKenzie, Col. Grant, Major Thompson, Capt. Starratt, Dr. Pollok, Dr. John Forrest, Professor Shaw and Rev. G.S. Carson. After dinner had been served, the toasts of the evening were proposed-that to the King by Principal Mackinnon, and to Canada by Professor Ken. Dr. Forrest waxed eloquent over the army and navy and received great applause from the students. Dr. Falconer in proposing the toast to the Universities, spoke of what these institutions had contributed to the life of nations. President Mackenzie, and G.S. Campbell replied to this toast, in fitting terms, giving some very good practical counsel to the young men volunteering for the service of their country and expressing their admiration for the step they had taken. Mr. Partridge eloquently proposed the Cycle Corps and Capt. Starrat responded followed by [illegible] of King’s College. Mr. M. MacKinnon proposed the Stationary Hospital Corps, which was replied to by Col. Grant. Dr. Pollock, in a thoughtful as well as humorous speech proposed the Home Guards. Mr. Thompson responded, giving the students some valuable hints with regard to their military drill. The Press was proposed by Mr. W.R. Auld and responded to by Mr. Carson.

Songs by the Messrs. Guildford, added much to the enjoyment of the evening. During the banquet somewhat of a sensation was caused by the arrival of a telegram announcing the victory of the British fleet off the Falkland Islands by the British fleet. This news called forth demonstrations of patriotism.

While the meeting had a decided military flavor, the addresses contained earnest Christian counsel, and all felt the solemnity of the great crisis which called forth the finest heroism of our young men, and laid upon us all such sacred obligations.