You are here: Home > All News > Committee News > Archives Committee > From the very beginning

From the very beginning

I always find it fascinating to view the documents recording the beginning of a church. Of course, there are a lot of events and work that goes on behind the scenes long before a church building is built but the part we usually get to see in the historical record is when a group of people get together and decide that they need a “house of public worship.” The following minutes are from Caribou Presbyterian Church, which eventually became Melville United Church before it joined The Presbyterian Church in Canada in 1951. As a newspaper article in the September 3, 1853 Presbyterian Witness newspaper issue relates, Caribou River, which was connected with Knox Presbyterian Church in Pictou, only received a few ministerial visits in a decade but “some few families in that district, warmly attached to the church of their fathers, and living in the anticipation of brighter times, resolved on building a place of worship in this somewhat neglected place, that they might thereby more fully participate in the labors of their minister, and bring the preaching of the gospel more within the reach of the people around.”

Sometimes it could take a few years for the building to be completed and there were an enormous amount of resources required, both in terms of finances and time, but church members all over the Maritimes persevered in their leap of faith. These minutes serve as one of many testaments to their hope and anticipation. 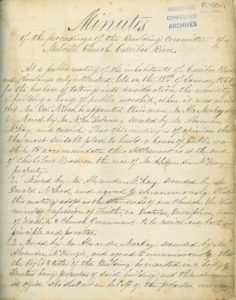 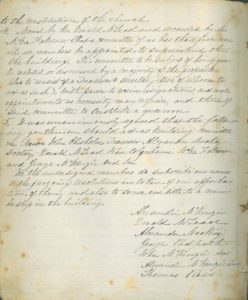