You are here: Home > All News > Committee News > Archives Committee > The children all gathered round papa while he read the letter

The children all gathered round papa while he read the letter

This letter was found with some records from First Orthodox Congregational Church in St. Stephen which is one of the predecessors of Milltown United Church in New Brunswick. The writing is a little tricky at times and the scans are rather faint so there is a transcript following the images. Sounds like a typical letter (or maybe a Facebook message or email c. 2017) one would send their parents! 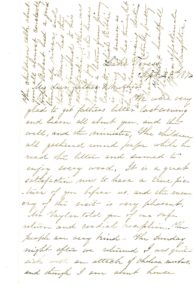 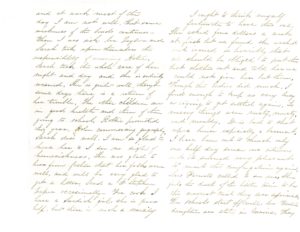 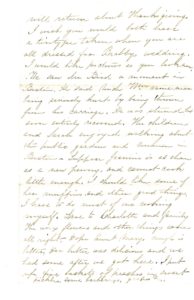 My dear mother and father,

We were very glad to get fathers letter last evening and learn all about you, and that well, and the minister. The children all gathered round papa while he read the letter and seemed to enjoy every word. It is a great satisfaction now to have a true picture of you before us, and the memory of the visit is very pleasant.

Mr. Taylor told you of our safe return and cordial reception. The people are very kind. The Sunday night after we returned I was quite sick with an attack of cholera [illegible], and though I am about house and at work most of the day I am not well. That same weakness of the hands continues. When I was sick Mr. Taylor and Sarah took upon themselves the responsibility of weaning Katie. Sarah took the whole care of her night and day and she is entirely weaned. She is quite well, though some days there is a return of her trouble. The other children are in good health and three of them are going to school. Robbie promoted this year, Helen commencing geography. Sarah does well. I am so glad to have her and I see no sight of homesickness. She was glad to hear from father that her folks were well, and will be very glad to get a letter. Send a St. Stephen paper occasionally. For cook I have a Swedish girl, she is poor help, but there is such a scarcity.

I ought to think myself fortunate to have this one. She asked four dollars a week at first but we found she washed and ironed so horribly, that we should be obliged to put the best clothes out and told her we could not give her but three. Though the ladies did much, I find enough to keep us very busy in trying to get settled again. So many things were rusty, musty, and mouldy. It is bad to shut up a house especially a basement.

I have been out to church only one half day since our return and it seemed very pleasant to meet the congregation again. Mrs. Farwell called to see me, she feels the death of the little twin to be the severest trial they ever experienced. The schools start off well, Mr. Westin’s daughters are still in Maine, they will return about Thanksgiving.

I wish you both would have a tintype taken when you are all dressed for [Brabbys?] wedding. I would like pictures as you look now.

We saw Mr. Bird a moment in Boston. He said Wm came near being seriously hurt by being thrown from his carriage. He was stunned, but soon entirely recovered. The children and Sarah enjoyed walking about the public gardens and common in Boston. Suppose Jeannie is as cheap as a new penny, and cannot cook little enough. I should like some of her muffins and other good things. I have to do most of our cooking myself. Love to Charlotte and family. The wax flowers and other things came all right. Hope Aunt Marys cough is better. Her butter was delicious and we had some after we got here. I put up five baskets of peaches in sweet pickles, some barberrys, grapes [illegible].

The children talk about you all almost constantly. Hope Robert had a good time up river, and that Henry has the well finished to his satisfaction. There was great joy in the house over a letter from Jimmy [illegible] which Robbie is going to answer as soon as he has time, he is commencing Latin and has to study pretty hard.

With a heartfull of love