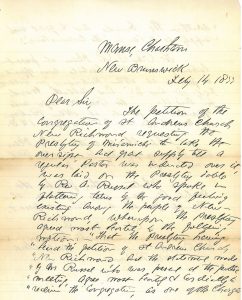 On January 20, 1833, the five Church of Scotland ministers in New Brunswick met in Fredericton and constituted themselves as the Presbytery of New Brunswick in connection with the Church of Scotland. Two years later, with there now being 10 ministers on the roll, it was decided to turn the Presbytery into a Synod which was divided into the two Presbyteries of Saint John and Miramichi. The first meeting of Miramichi Presbytery was held on September 2, 1836 in Newcastle. The moderator, Rev. Stevens of Restigouche, was not present, so Rev. James Hannay acted as the moderator pro tempere. Rev. James Souter of Newcastle was chosen as clerk. The Presbytery asked the members to keep records of session and a register of baptisms that would be regularly inspected by the Presbytery. A resolution that no couple should be married without having their impending marriage proclaimed at 3 church services or having obtained a civil licence was unanimously passed. With that, the meeting was adjourned and ended with prayer.

On July 1, 1868, the Synod of New Brunswick and the Synod of Nova Scotia and Prince Edward Island were united to become the Synod of the Presbyterian Church of the Maritime Provinces of British North America in connection with the Church of Scotland. Miramichi was one of the five Presbyteries in the Synod. 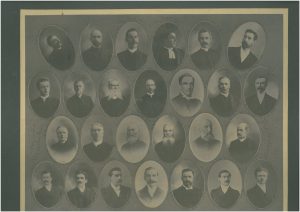 Although there was much controversy and disagreement throughout the country about whether church union and the subsequent creation of The United Church of Canada was the best way forward, the following resolution was unanimously passed by Miramichi Presbytery at it’s May 19, 1925 meeting in Bathurst: “The Presbytery of Miramichi hereby places itself on record as being heartily in favour of Union, and as a Presbytery will enter the United Church of Canada.” The last Presbytery meeting before church union was on July 21, 1925. Other than a reference to the treasurer’s books and cash being handed over to the “United Presbytery”, there was remarkably little mention of all the impending changes at the last meeting of Miramichi Presbytery as part of The Presbyterian Church of Canada. The meeting closed with a matter of fact notice of adjournment “The business having been finished, the sederunt was closed with suitable remarks and the benediction by the Moderator.”

One of the first Methodist ministers to the Miramichi was Rev. J.B. Strong who visited the area in 1828. A church was built in Chatham shortly after as Methodism began to spread. In 1875, the Miramichi District of the New Brunswick and Prince Edward Island Conference was created out of the Fredericton District. The new district included the circuits of Chatham, Richibucto, Baie du Vin, Bathurst, Dalhousie, Derby, and Boiestown. Together these circuits represented 55 preaching places; 389 members; and 2648 people attending the worship services. 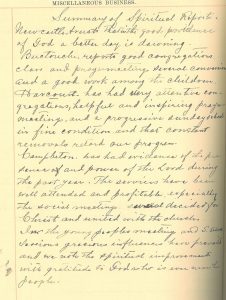 The name of the district was changed to Chatham in 1898. At this time, the district included the circuits of Chatham, Newcastle, Derby, Richibucto, Buctouche, Harcourt, Bathurst, and Campbellton. Gaspe and Cape Ozo in Quebec were connected to the New Brunswick and Prince Edward Island Conference to make it easier to supply ministers to that area. 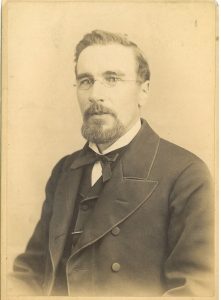 At the last meeting of Chatham District in May 1925, it is evident that the members were fully accepting of the idea of church union as outlined in this resolution: “Resolved that this annual District meeting of the Chatham District as it closes what is in all probability the last session under the honored name of Methodism place on record its appreciation of the loyalty and cooperation of the Methodist people throughout the district and also the recognition of the splendid Christian fellowship and service the past history of the district show and further show how the members of the district meeting both ministerial and lay now are prepared to enter cordially into the new relationship and tasks of the United Church of Canada to give devotion to its truths and ideals and faithful administration of its offices…”

On June 10, 1925, The United Church of Canada was formed by the union of the Congregational, Methodist, and the majority of the Presbyterian Churches in Canada. 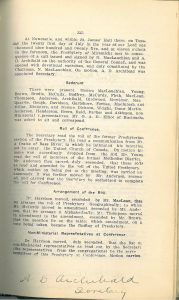 First meeting of Miramichi Presbytery of The United Church of Canada, July 21, 1925

The first meeting of Miramichi Presbyery under The United Church of Canada was held on the same day, July 21, 1925, as the last meeting of the Presbyterian Presbytery. The “new” Presbytery got right to business with a discussion of whether the new roll should be arranged geographically or alphabetically. Spoiler alert: It was decided to let the matter set for a while as agreement on the best method was not forthcoming.  In a nod to its past, the roll of the former Presbyterian Presbytery was read as well as the roll of the former Chatham Methodist District. The minutes reported that “Dr. Harrison fittingly and touchingly reported on the meeting of the old Presbytery, bespeaking the Blessing of God upon the work of the United Church.” Considerable discussion was also spent on the boundaries of Presbyteries with a resolution being passed that the Conference consider creating at least four presbyteries in New Brunswick.

As Miramichi Presbytery meets for the last time this month, its members can look back with pride at its long history within the Maritimes and its work in the Presbyterian, Methodist, and United Churches.

Sources: Short History of the Presbyterian Church in the Dominion of Canada From the Earliest to the Present Time. William Gregg, C. Blackett Robinson: Toronto, 1893 and History of Methodism in Eastern British America by D.W. Johnson. Sackville: Tribune Printing Co., 1925