You are here: Home > All News > Committee News > Archives Committee > The Tryon United Church Utopian Society’s Quest for a Piano

The Tryon United Church Utopian Society’s Quest for a Piano

As I was scrolling through some records, I came across the minutes of a group with the intriguing name of Utopian Society. It turns out that the Utopian Society was the name of the Young People’s Society at Tryon United Church in PEI. The group met every Friday and discussed a variety of topics, including mission work, poems and other literature. The group also held debates; held fundraisers for their church; went on picnics; and met with other youth groups in the area. Every meeting generally followed the same format: some songs, the reading of Scripture, a lecture or discussion on a topic; prayer, business, and some games led by the Recreation Committee. 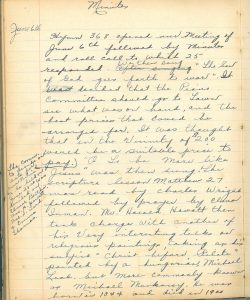 One of the projects the Utopian Society undertook was to acquire a piano for the church. The minutes don’t mention how the idea first came about but on June 6, 1930 it was decided that the Piano Committee would go to “town,” in this case town being Charlottetown, to see what was available for pianos. The group thought that $200 would be a suitable price, which would have been no small amount at the time! That would be equal to approximately $5000 US today. 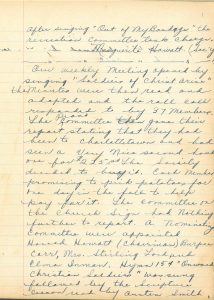 At the next meeting, the Piano Committee reported that they had seen a very nice, secondhand piano for sale for $225. The Society decided to go ahead with the purchase with each member promising to pick potatoes for a day in the fall to help pay for the cost.

A couple weeks later, the Official Board of Tryon extended a vote of thanks to the group for the “capable way in which they exchanged the organ for the piano.” There is nothing in the minutes that details this exchange but perhaps the group couldn’t raise quite enough for the piano so arranged to exchange the church organ for a piano? Later on in the fall, Mrs. Harold Howatt reported that the money had been sent in for the piano so the group members must have fulfilled their promise to pick potatoes. In any case, the Utopian Society got their piano! 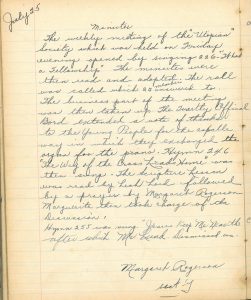