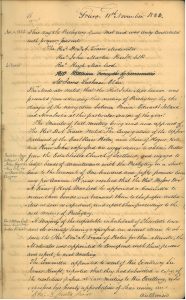 The Presbytery of Pictou was organized in 1795 and consisted of Rev. James McGregor; Rev. Duncan Ross, Rev. John Brown, and two elders. A little over twenty years later, on July 3, 1817, the Presbyteries of Truro and Pictou along with a few ministers of the Church of Scotland united to form the Presbyterian Church of Nova Scotia. This new body was constituted as the Synod of Nova Scotia and divided into three Presbyteries: Halifax, Truro, and Pictou. Most of the ministers in the new Synod were allied with the Secession Churches.

On July 1, 1868, the Synod of New Brunswick and the Synod of Nova Scotia and Prince Edward Island were united to become the Synod of the Presbyterian Church of the Maritime Provinces of British North America in connection with the Church of Scotland. 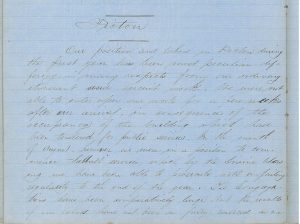 Truro Methodist District-Excerpt from State of Circuit report for Pictou, 1861

The Methodist churches in Pictou were overseen by the Truro Methodist Distirct. By 1924, the Truro District had fourteen active Circuits covering the geographic area of Colchester and Pictou Counties in Nova Scotia. 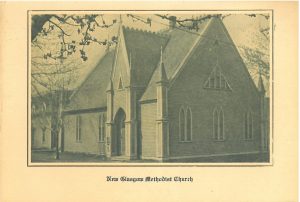 Stellarton, or Albion Mines as it was then known, had a Methodist minister sent to them as early as 1845. In fact, the minister had been requested by the General Mining Association as many of its employees were Methodist. From this area, other Methodist churches were established in places like Westville, New Glasgow, and Eureka. In 1868, the congregation of the Morrisonian Church in Pictou petitioned the Methodist Conference of Eastern British America to send a minister. Rev. Leonard Gaetz arrived soon after and the Methodist cause in Pictou began to grow. 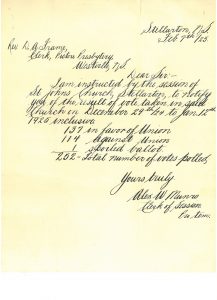 On June 10, 1925, The United Church of Canada was formed by the union of the Congregational, Methodist, and the majority of the Presbyterian Churches in Canada. The first full meeting of Pictou Presbytery was held on July 21, 1925 at St. John’s United Church in Stellarton. A variety of topics were discussed, including the bounds of Presbytery (from Sherbrooke inclusive to the Colchester line); the appointment of lay members; what to do with the old Presbytery records; and reports of the votes on church union. The rest as they say is history! The work of the members of Pictou Presbytery over the years has helped lay the foundation for the church as we now know it.

Sources: Short History of the Presbyterian Church in the Dominion of Canada From the Earliest to the Present Time. William Gregg, C. Blackett Robinson: Toronto, 1893 and History of Methodism in Eastern British America by D.W. Johnson. Sackville: Tribune Printing Co., 1925