You are here: Home > All News > Committee News > Archives Committee > What’s New At the Archives

What’s New At the Archives

Every year, the Archives receives a variety of interesting records from churches, Presbyteries, individuals, and other archives. These records are processed, listed, and made available for church members and other researchers but often people don’t realize some of the gems we have here at the Archives. From now on, I hope to feature some of the new records that have come into the Archives this past year so keep an eye out for “What’s New at the Archives” posts. If any of the records mentioned catch your attention, feel free to contact the Archives. 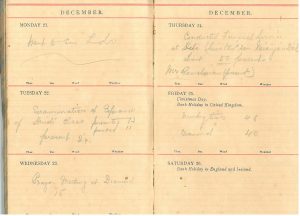 This past May, the Archives was fortunate to receive the original diaries of Henry Laltoo. Henry Laltoo was born in 1876 in Farrukhabad, Central India. His family came to the island of Trinidad as indentured labourers when Laltoo was five. It was here that he was educated by Miss Copeland, a young missionary from Truro. Laltoo was eventually baptized as a Christian and qualified as a teacher. After training at St. Andrew’s Theological College in Trinidad, he was ordained as a Presbyterian minister in January 1915. The year before that, he started keeping a diary and would continue to keep a diary from 1914 until his retirement in 1948. Unfortunately, only twenty of the thirty four diaries survived, but the ones that did survive serve as an interesting and informative picture of Henry Laltoo’s work among the Hindu and Muslim people living in Trinidad, his family life, and the broader Trinidadian society. The diaries record information such as the number of meetings, births/baptisms/marriages/deaths; attendance at services; records of visitations, church and family events, and cash accounts. 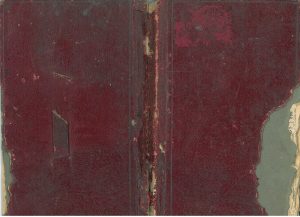 Henry Laltoo’s granddaughter, who donated the records, lovingly scanned all the diaries as well as prepared as an appendix. Also included with the records are autobiographies of Henry and his son Ralph; a memory book;  a few pieces of correspondence; some photographs; and a couple of essays on Henry Laltoo.

It’s wonderful to have these records here at the Archives, especially since we don’t have many other records from Trinidad. It is also very rare to have such a large number of diaries from any one individual.