You are here: Home > All News > Committee News > Archives Committee > Following the Internet trail of a 20th Century Minister’s Family

Following the Internet trail of a 20th Century Minister’s Family 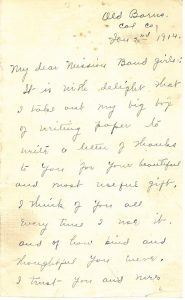 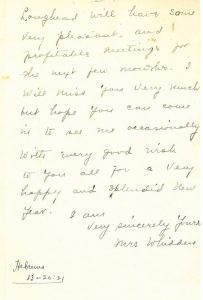 The advent of the Internet and the ability to digitize archival records to make available online is certainly very helpful when it comes to finding out information that you might not have otherwise known about a church or an individual. Case in point-the Old Barns Presbyterian Sunshine Mission Band. This was a group for young people people led by one Mrs. Whidden. In the 1912-1915 minute book, I found a sweet letter dated January 1914 from Mrs. Whidden to her “dear Mission Band girls.” In the letter she thanks the girls for the gift of writing paper and wishes them “very pleasant and profitable meetings” for the next few months with Mrs. Loughhead. Sure enough, in the January 3, 1914 meeting, the minutes state that Mrs. Loughead acted as superintendent as Mrs. Whidden was absent. 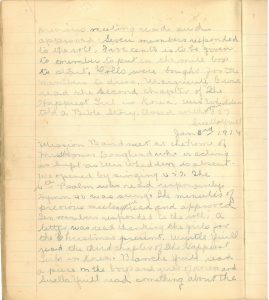 All of this got me wondering why exactly Mrs. Whidden would be absent for a few months. She was obviously already married so that ruled out that possibility (it was common at the time for women to give up many of their volunteer responsibilities once they were married) and she wasn’t ill or else she wouldn’t have had a specific time period in which she would return to the group. The most likely possibility was that she was expecting a baby so I went to the Nova Scotia Historical Vital Statistics online and sure enough, there was a birth record for an Aileen Margaret Whidden, born in 1914 to Rev. William and Mary Whidden.

According to our directory, W.A. Whidden was minister at Clifton from 1912-1916 so I did another quick Google search and viola, a photograph of Rev. Whidden’s 1910 graduation photograph from the Dalhousie University Library site. Unfortunately, the Whidden family’s story takes a sad turn with the death of Rev. Whidden in 1933 from a freak accident: http://chvvictoria.blogspot.com/2016/10/rev-whidden.html

It’s not often that we are able to find this much online information about people who were born over a hundred years ago but this is just a small example of the historical treasures the Internet can yield.