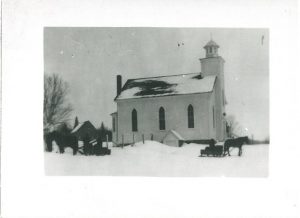 The first Presbyterian minister to come to Cape Breton was Rev. James McGregor, from Pictou Presbytery, who visited Sydney in 1798 and 1813. At the time of his first visit, there were only twenty Presbyterian families on the whole island. However, beginning in 1802, a steady stream of Presbyterian immigrants began to come to Cape Breton and by 1842, there were approximately 12,000 Presbyterian families on the Island. Rev. McGregor visited again in 1818 and it was during this time that he helped to form the congregation at Mabou and Port Hood. In 1824, Pictou Presbytery, most likely on the urging of Rev. McGregor, sent two Gaelic-speaking graduates of Pictou Academy to Cape Breton.

One of the first Methodist workers in Cape Breton was John Watt, who ministered amongst soldiers of the 21st regiment in the late 1700s. John George Marshall, Chief-Justice of Cape Breton, really helped jump start the Methodist movement in Cape Breton as he began conducting services in homes and oversaw the construction of a small meeting house. In 1829, Marshall attended the Halifax District meeting in 1892 and appealed for a minister to be sent to the Island. James G. Henniger, a student minister, was sent to Sydney until a minister, Matthew Cranswick, could be brought over from England. From Sydney, the Methodist cause was spread throughout Cape Breton.

The Methodist Conference of Eastern British American was organized in 1855 and two circuits from Cape Breton, Sydney and Margaree, were mentioned in the minutes. These two circuits were at the time part of the Charlottetown District centered on Prince Edward Island. When the Nova Scotia Methodist Conference was organized in 1874, it was divided into six districts: Halifax, Truro, Cumberland, Guysboro and Cape Breton, Annapolis, and Liverpool. In 1895, the Guysboro and Cape Breton District was divided into two districts: Guysboro and Sydney. Almost 30 years later in 1924, there were eleven circuits with 1179 full members on Cape Breton Island.  Nine of these circuits were connected with the Sydney District which comprised all of the Island except the areas of Port Hood and Port Hawkesbury. 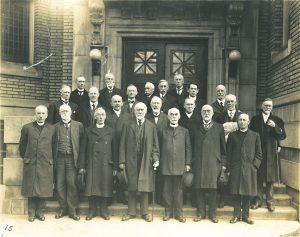 On June 10, 1925, The United Church of Canada was formed by the union of the Congregational, Methodist, and the majority of the Presbyterian Churches in Canada. 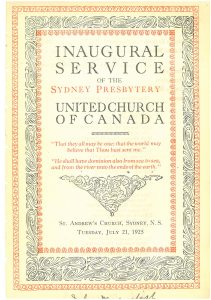 The first meeting of Sydney Presbytery was held at St. Andrew’s United Church Hall in Sydney on July 21, 1925. The roll was called and officers were appointed to the various standing committees. During the meeting, Presbytery was informed that St. Matthew’s Presbyterian Church and Wesley Methodist Church in North Sydney had agreed to unite and would hold their first joint service on August 2. After the end of the meeting, the members of Presbytery then proceeded to march to St. Andrew’s Church and sat in reserved pews for the inaugural service. The service was conducted by Dr. A.S. Rogers. Rev. Kenneth M. Munro preached from the text “This is the day which the Lord hath made, we will rejoice and be glad in it.” Rev. James Fraser gave a talk in Gaelic and also led in Gaelic prayer. The choirs from the United Churches in Sydney led the songs including “The Church’s One Foundation,” “Here, O My Lord,” and “Crown Him With Many Crowns.”

Just as the members from that first meeting some 90 years ago adapted to huge changes within the church and their society, the churches of what is now Sydney Presbytery can use their heritage as a foundation to move forward into the changes of 2019.