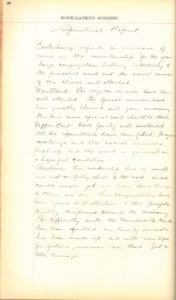 Spiritual reports of some of the circuits of Woodstock Methodist District, 1895

Methodism was introduced to Fredericton in 1971 by Rev. Abraham John Bishop. Fredericton first appeared as its own circuit in 1794 and the first Methodist church in Fredericton was built in 1810. Ministers from Fredericton then visited various communities on either side of the St. John River, establishing Methodist congregations throughout the area. When the New Brunswick and Prince Edward Island Conference was created in 1874, Fredericton was one of its five districts. In 1875, some of the circuits in the Fredericton District were separated to from the Miramichi District and in 1893, the Woodstock District was created from the Fredericton District. At this time, there were no ministers in Queens County, Sunbury County, or Carleton County.

The beginning of Methodism in Carleton County was thanks to James Killen and his wife who moved to the area from Miramichi, bringing their faith with them. When Rev. William Temple visited Woodstock in 1821, he saw the opportunities in the area and set about securing a preacher. Unfortunately, the first prospective minister, Mr. Snelgrove, drowned on the way from England. Finally, in 1832, A. McNutt was appointed to the field, with his circuit including the area from Woodstock to Tobique. The first Methodist church in Woodstock was built in 1832. 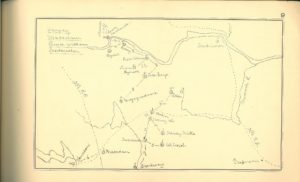 The Presbyterian Church in Carleton and York Counties:

On July 1, 1868, the Synod of New Brunswick and the Synod of Nova Scotia and Prince Edward Island were united to become the Synod of the Presbyterian Church of the Maritime Provinces of British North America in connection with the Church of Scotland. St. John Presbytery would have encompassed the churches in Woolastook Presbytery. 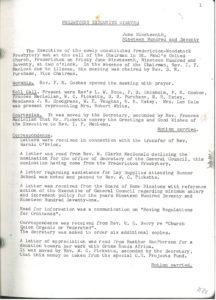 On June 10, 1925, The United Church of Canada was formed by the union of the Congregational, Methodist, and the majority of the Presbyterian Churches in Canada. Fredericton Presbytery included the churches in York County, Sunbury County, and Queens County and Doaktown in Northumberland County. Woodstock Presbytery encompassed the churches in Carleton County and Victoria County as well as Edmunston in Madawaska County. Fredericton and Woodstock Presbyteries united to form Woolastook Presbytery on June 19, 1970.

Sources:  History of The Presbyterian Church in the Dominion of Canada by W. Gregg. Toronto: Presbyterian Printing and Publishing Company, 1885 and History of Methodism in Eastern British America by D.W. Johnson. Sackville: Tribune Printing Co., 1925