Rev. George Gillmore lived a fascinating life despite being a relatively unknown historical figure, and his life shows the value that there is in researching the lives of everyday figures. Little is known about Rev. George Gillmore’s past before arriving in America. It is believed he was born in the year 1720 in County Antrim, Ireland. There is evidence of him studying at the University of Edinburgh in 1762 but there is no record of him graduating. He travelled to Philadelphia in 1769 with his wife Ann and three kids who were all under 10 at the time. I don’t have any kids so I can’t speak from experience, but that sounds like a real headache to me! After arriving in America, he preached in New England until the American Revolution broke out.  The revolution greatly hindered the Reverend and his family economically and socially. Rev. Gillmore eventually had to flee to Canada alone through the woods as he was a staunch loyalist, but he was later rejoined with his family in Canada. Their fortunes were not much better in Canada for quite some time, but they eventually improved. The family settled in Grand Pré, Nova Scotia where Rev. Gillmore oversaw the construction of the Covenanter’s Church, the oldest surviving Presbyterian Church in Canada. Rev. George Gillmore died at the age of 91 in 1811, the same year the church was completed.

Rev. George Gillmore’s trip to Philadelphia with his family, as recounted in his diary, was a harrowing experience. There was thievery of liquor and other small crimes, along with blasphemy and further rowdiness. Rations were small, days and nights were long, and sailing conditions were not always favourable. At one point they came across another ship with a load of rum. The passengers of Rev. Gillmore’s ship wanted to replenish their stock at a price of 3 shillings per gallon, but the captain seized it as his own and marked the price up to 6 shillings per gallon. All of this is to say that conditions onboard the vessel were quite unfavourable. Below is an excerpt from Rev. Gillmore’s diary about the journey. Be sure to note the strong language which would not have been uncommon for a minister during this time period. 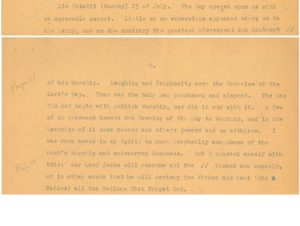 “Die Sabatii (Sunday) 23 of July. The Day opened upon us with an agreeable Aspect. Little or no veneration appeared among us to the Deity, but on the contrary the greatest Disrespect and Contempt of his Worship. Laughing and Prophanity were the Exercise of the Lord’s Day. Thus was the holy Day prophaned and misspent. The Day did not begin with publick Worship, nor did it end with it. A few of us convened toward the Evening of the Day to Worship, and in the Exercise of it some mocked and others jeered and so withdrew. I was much moved in my Spirit to such Prophanity and Abuse of the Lord’s Worship and undeserved Goodness. But I quieted myself with this: our Lord Jesus will consume all the Wicked and ungodly, or in other words that he will destroy the Wicked and cast into Hades all the Nations that forget God” (Gillmore 10-12).

Rev. George Gillmore’s diary is one of the oldest pieces we have here at the archives; however, there are other interesting pieces in the Gillmore collection as well. The Gillmore Saga by Sidvin Frank Tucker contains a biography of Rev. Gillmore, outlines the genealogy of Gillmore’s descendants, and has maps which trace Gillmore’s movements in North America. There is correspondence pertaining to Gillmore and his diary between Tucker and Dr. J.B. Hardie. Finally, there is a leaf which also provides a biography of Gillmore. For a complete listing of the records the Archives holds for Rev. George Gillmore, click the following link: https://marconf.ca/wp-content/uploads/2019/03/George-Gillmore-fonds.pdf