Rev. George Farquhar (1880-1975) was born in England and came to Nova Scotia as a child, growing up in Newport, Hants County. He attended Dalhousie University, and then later the Presbyterian College. He served as a missionary at Harrington Harbour and Labrador and was a chaplain in Europe and Russia during World War I. He served as a minister of St. Andrew’s Presbyterian Church in New Glasgow, Nova Scotia after WWI until 1925. The United Church had a surplus of ministers following its formation in 1925, so he resumed the law studies that he had previously suspended to pursue ministry. After completing his law degree, Farquhar was hired as editor-in-chief of the Morning Chronicle where he worked from 1927-1937. Other roles he occupied in life were a member of the Nova Scotia Board of Public Utilities and President of the Nova Scotia Historical Society. He passed away on June 8, 1975.

While returning home to Canada from Russia, Rev. George Farquhar wrote a letter to the Rev. (Col.) William Beatty, D.D., C.M.G., Director of the Chaplain Service. Farquhar had been stationed in Omsk, Russia with British troops, the 9th Battalion of the Hampshire Regiment, from December 17th, 1918 – April 27, 1919. This was amid the Russian Civil War, so the country was in massive turmoil. The British and Canadian militaries were in Russia supporting the anti-Bolshevik cause. 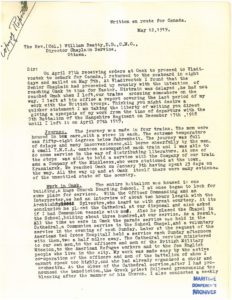 Rev. Farquhar begins by describing the long, cold journey by train. All the men were housed in boxcars, and each car was outfitted with a stove. It took 23 days to reach Omsk, and temperatures reached as low as -58°F (-50°C). When they arrived, there was unrest in the city. Crime was rampant and nightly patrols were needed to keep the peace. However, after the presence of the patrols was noted and and the winter further set in, the situation calmed down and the patrols were no longer needed. Rev. Farquhar spoke highly of the 9th Regiment and regretted he could not remain with them longer in Russia. 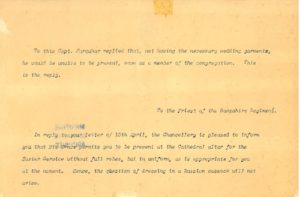 One of a series of letters concerning the Easter Service between Rev. Farquhar and the Russian Priest. The Priest invited Rev. Farquhar to be present at the altar in his military uniform since he did not have his robes. 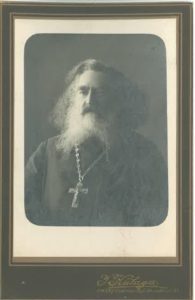 Through these strong relationships, Rev. Farquhar ended up as the main point of connection between his superiors and the Russian Church. As such he delivered an address on behalf of his colonel highlighting the similarities between the Church of England and the Greek church. He also prepared a document explaining the “wonderful stubborness [sic] and discipline” of their troops for the Archbishop Sylvestre. The document also addressed “the need of some form of government, the different forms of government, democracy the best, the responsibilities of democracy, the necessity of taxation, liberty not license, the duty to be ready to defend it, etc. etc. but all in the very simplest of language. This was translated into Russian to be distributed among the Russian soldiers” (Farquhar 3). Rev. Farquhar felt that he gained valuable insight into the developments in Russia and that what he learned should be shared far and wide since there was a lack of awareness amongst the populace.

Click here to see a listing of the records the Archives holds for Rev. Farquhar.