Archives Recipe of the Month-Christmas Edition

What would Christmas be without gingerbread? Thanks to the Mission Circle at First United Church in Truro in 1935, you have your choice of two fine gingerbread recipes. One recipe is called “My Best Gingerbread” but the other recipe throws some marshmallows into the mix so it would be a tough decision to make unless of course you try both! As is the case with many early cookbooks, these recipes are rather short on detail although the second recipe does include a baking time at least. 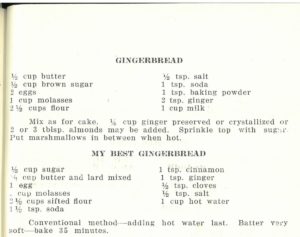 As an extra bonus, I have also thrown in a recipe for inexpensive fruit cake. Canada would have still been in the throes of the Great Depression at the time so it is not surprising that people were adapting recipes to save money on ingredients.

If you have a chance to try out any of these recipes, let us know how it turned out in the comment section below!