The last Methodist ordinand in the Maritimes 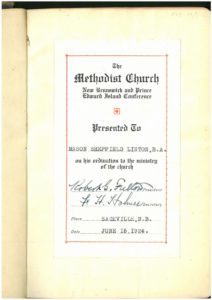 The other day I happened to come across a Bible which belonged to Rev. Mason Sheffield Linton. This Bible was presented to him on the occasion of his ordination as a Methodist minister into the New Brunswick and Prince Edward Island Methodist Conference on June 15, 1924. The United Church of Canada, of which the Methodist church became a part, was created just one year later, so Mason Linton was the last Methodist minister to be ordained in the Maritimes.

Mason Linton was born in Saint John, New Brunswick on September 21, 1891. He later attended Mount Allison from 1919-1923, graduating with an Arts and Theology degree. He did one year of graduate work before his ordination in 1924. As per the requirements of the Methodist Church at the time, he had also spent six years on probation, serving in various churches as a student minister. The Saint John Methodist District meeting minutes of June 4, 1924 note that the examination of Mason Linton was satisfactory and a complete record of his college requirements were presented so he was able to be ordained.

A newspaper clipping found in the Bible describes the service with the officers of the Conference participating in the laying on of hands. Mason Linton had long been associated with the Centenary Methodist Church, Saint John in a lay capacity (later to become Centenary-Queen Square United Church), so a representative from that congregation presented him with a gift of money after offering some kind remarks.

In case you are curious what a Methodist ordination service would have looked like, here’ s the order of events for Mason Linton’s ordination in 1924. 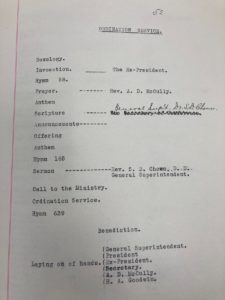 Rev. Linton served various churches within Maritime Conference until his death in 1935. His obituary stated that he was “bright and buoyant, his wit and humour indicated a wholesome outlook on life.” His work with children and young people was also noted as “his characteristic contribution to the life of the church.” 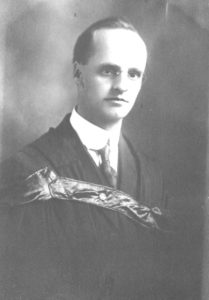