You are here: Home > UCC East > Fundy St. Lawrence Dawning Waters Regional Council > FSLDW Announcements > The life of a student minister in 1832 and a PEI update

The Archives has some really interesting personal records of individuals and families who served the churches in the region over the years. One such record is this letter from William Fraser to Rev. James Dobson. Fraser, who was 2 years away from being ordained, was sent by Rev. Dobson to the northeast of New Brunswick (Dalhousie, New Mills, Bathurst, etc) to visit the congregations in the area. You will have to read the letter for yourself to learn more about what a huge undertaking this was but let’s just say it involved a schooner running aground; walking close to 150 kilometers; bitter cold; and having to borrow money from ministers in the area to support his journey. These challenges obviously didn’t deter William Fraser from the ministry though as he did eventually become an ordained minister!

I would not be so cruel as to force you to decipher Fraser’s handwriting so you can click here for a transcript. Here’s a little taste though of what the letter looks like: 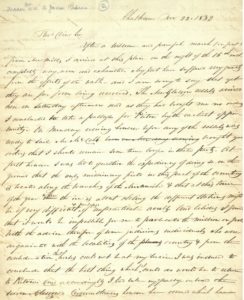 As a bit of an aside, William Fraser was born at McLennan’s Creek in Pictou County, Nova Scotia on May 19, 1808. He was educated at Pictou Academy and Pine Hill Presbyterian College. He was ordained in 1834 and remained in Nova Scotia until moving to Ontario in 1836. Rev. Fraser eventually received a Doctor of Divinity from Queens University and served as an assembly clerk for The Presbyterian Church in Canada.

Thanks to all of you who emailed or left a comment to identify the 4 unidentified PEI churches last week! It looks like the unanimous consensus is: