It’s probably rather cruel to post recipes of candy during Lent but how can one pass by the mention of ice cream candy without giving it some sort of recognition? The following recipes were taken from The Helping Hands Cookbook compiled by the ladies of St. Paul’s Presbyterian Church from Kentville, Nova Scotia in 1914. This church would later become part of St. Stephen & St. Paul United Church which would eventually become part of Orchard Valley United Church. 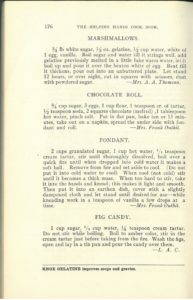 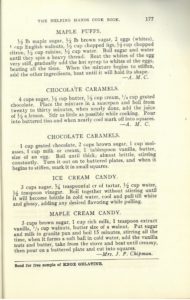 I’m all for the maple candy and the chocolate caramels but not 100% sure how I feel about figs in candy. It is rather funny to see the recipe for marshmallows since homemade marshmallows are all the rage now.

A note with the cookbook says that it was in the possession of a Emma Lister for many years.

Post a reply in the comments voting on your favorite recipe featured here or feel free to put forward an argument that figs work in candy!