The price of lumber has been in the news a lot lately so I thought it would be neat to show some lumber related records from the 1800s. The information is from the minute book of the Building Committee of Higginsville Methodist Church in Nova Scotia (later became Higginsville United Church). The land was donated by Peter Higgins and it was originally decided that the size of the building would be 42 x 28 feet. This number was later revised to 42 x 40 feet.

During a meeting on November 24, 1888, the Building Committee decided that each person wishing to provide material set their own price and if there was any disagreement on the price supplied, a committee of three would be appointed to make a final decision.

In a May 18, 1889 meeting, the minutes state that “Each man was heard from respecting the timber and lumber taken by him” but there was no reference to any disputes over the price. Work was to begin on June 3, 1889 and it was hoped that the building be framed and boarded in 5 days. The church building officially opened on February 23, 1890.

The following pages are a list of the material that was to be supplied. Do any of these names sound familiar to people from the area? 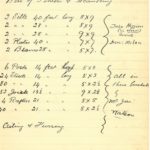 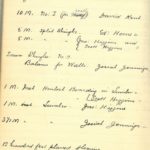 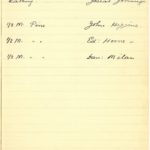