You are here: Home > First Dawn Eastern Edge Regional Council > FDEE – About Us 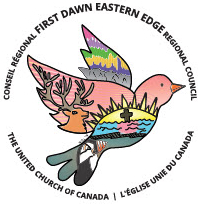 …humble people who live off the land and the sea…
With joy in our hearts and a song on our lips we,
the Newfoundland and Labrador conference of The United Church of Canada,
believe that we are called by God to love and serve others.
Through our various shared ministries in the name of Jesus Christ,
we are called to uphold the gifts and skills in each other; to honour differences;
to be accepting of change while honouring heritage and traditions;
to seek justice
and through all of this to know that we are not alone.

Thanks be to God

Let your adventure in ministry begin here in the First Dawn Eastern Edge – Region 16 – the most easterly region within The United Church of Canada. A region whose borders are the same as the provincial borders. It’s a place that Microsoft recognizes as having its own time zone. And why not. It’s where the sun rises first. It’s the newest province with an incredible past.

The people here live in places like Lobster Cove, Leading Tickles, Come by Chance, and Goose Bay. The people here can be described as humble people who live off the land and the sea. The First Dawn Eastern Edge region embraces a geography covering a vast land mass of 405,212 km2. Comprised of the “Big Land” Labrador and the island of Newfoundland with a population of approximately 514,409.

Region 16 – First Dawn Eastern Edge – is part of the wider United Church of Canada, and joined the United Church before it joined Canada and has its own Act of Parliament. We do not have presbyteries like other regions in the United Church. We have Districts.

There are two Districts, the East and the West. The region has 87 Pastoral Charges and five District-recognized ministries in chaplaincy services. There are 200 congregations and they are located throughout the province, both urban and rural. The East District is comprised of the Northeast Avalon to the town of Terra Nova. The West District begins at Glovertown to Port-Aux-Basques and all places in between, as well as Labrador.

We are very proud to be part of The United Church of Canada and feel very blessed to live out our ministry in this unique place.

Find a Community of Faith