A Brief History of the Maritime Conference United Church Women

At the time of Church Union in 1925 when the Methodist, Presbyterian and Congregational churches became the United Church of Canada there were existing groups of women in all of these congregations whose primary purpose was to support and promote missions. They came together to form the Women’s Missionary Society or WMS.

A year later at the second General Council a constitution was approved for a Woman’s Association, the WA. This brought together the Ladies Aids organizations who worked to raise money to support congregational and community needs

It was at the 19th General Council in 1960 that approval was given to amalgamate the two organizations into the United Church Women, and UCW was officially proclaimed in 1962.

The Maritime Conference United Church Women held its inaugural meeting in Trinity-St.Stephen United Church in Amherst, NS on March 14, 1962 and its first President was Lily Mooers of Fredericton, NB.

Those early years required much study and understanding to bring the two streams of service into one, and it was not always smooth sailing, but UCW has become a valued organization in the United Church of Canada, most probably due to the persistence, patience and vision of those women in 1962, and the dedicated efforts of women since that time. 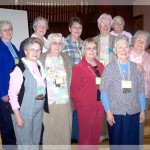 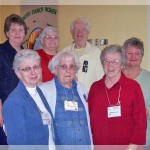 Information obtained from “Sailing Through Uncharted Seas”
written by Marti Walker and used with her permission.