On the first weekend of August 1953, more than 80 men from all over the Maritimes gathered at Camp Berwick in Nova Scotia for the first conference of Maritime United Church Men. 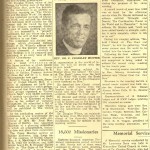 On Saturday morning, Dr. Douglas Wilson, the editor of the “Design for Living” page of the Montreal Daily Star gave the keynote address which was entitled “The Christian and His Daily Work” and focused on the rise of the religious lay movement. Attendees then split into groups to discuss Dr. Wilson’s talk. There was also a panel discussion on Saturday which focused on the “liquor problem.”

A special camp meeting service was held on Sunday. Over 2000 people came to the service to hear Dr. E. Crossley Hunter speak on the “Signs of the Times.” Dr. Hunter also spoke at the evening service.

The weekend must have been deemed a success because the attendees unanimously agreed to hold a second conference in 1954.