To one horse, saddle, bridle and oats

It’s always interesting to stumble across records documenting the very beginning of a church, whether it be a new congregation or construction started on a building. If you are doing some light reading through Methodist Conference minutes from the 1800s, chances are you will see many examples of the creation of a church or circuit. The Sussex Vale Methodist Circuit is one such example.

Methodist preachers visited the Sussex area as early as 1792 but it wasn’t until 1827 that the Sussex Vale Methodist Circuit was formed. The first reference to the creation of this circuit appear in the New Brunswick District of the Eastern British America Methodist Conference minutes (say that 5 times fast!) of May 10, 1827. At this meeting in Saint John it was recommended that a missionary be sent to Sussex Vale.

The minutes state that: “Sussex Vale is a beautiful section of the Province with a numerous population very favourably disposed on behalf of our missionaries. We have received a letter from this place a copy of which will be sent to you the Committee with our minutes.” 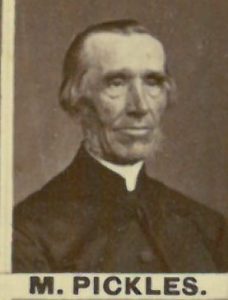 We don’t have the letter mentioned above but it most likely would have been some Methodist residents in the area asking for a minister to be sent to them. The letter must have had some impact because in 1827, Rev. Michael Pickles, just newly arrived from England, was sent to Sussex Vale as the first minister.

The following year, Rev. Michael Pickles provided an update on the growth of the circuit:

“The labours of your missionary in this newly formed Circuit have been greatly blessed by the Lord. There are now 82 persons in religious Society who have satisfactorily passed the regular time of probation some of whom have found peace with God through our Lord Jesus Christ, and others are seeking the Lord in a diligent use of the means of grace. The prospect of future usefulness is very encouraging and I hope the year coming will be as the last and much more abundant.”

Unfortunately, we don’t have many records for Sussex Vale from the earliest years but the following Quarterly Official Board accounts hint at some of what was required to run a circuit 200 years ago. In 1829, Rev. Michaels was paid approximately $4200 in today’s dollars and almost that same amount of money went towards a horse, saddle, bridle, and oats. The Sussex Vale Circuit covered a large distance so the horse was essential! Just a few of the communities within the bounds of the circuit were Sussex, White’s Cove, Smith’s Creek, Springfield, Newtown, Young’s Cove, and Cole’s Island to give an idea of the distances the minister would have to travel.

The Sussex Vale circuit was eventually split into smaller circuits but some of the churches on this original circuit are still active today, almost 200 years after that initial meeting in Saint John.