You are here: Home > All News > Committee News > Archives Committee > A little Presbyterian humour from the Archives….

A little Presbyterian humour from the Archives…. 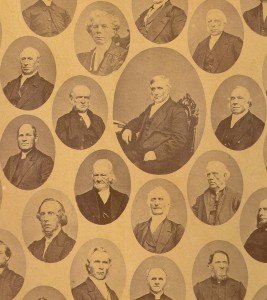 It may be hard to believe but church folk in the 1800s and early 1900s actually had a sense of humor. Granted, they didn’t smile in photographs and they wore a lot of black but that doesn’t mean they didn’t like their jokes. The Presbyterian Witness, a newspaper published in the Maritimes pre-1925, is filled with lots of jokes.  So here’s a taste of what was considered funny by the Presbyterians in 1910:

“A tourist once took refuge for the night in the cottage of an old lady. He asked her to wake him early in the morning, warning her that he was quite deaf. Upon awakening much later than the appointed hour, he found that the old lady with strict regard for the proprieties had slipped under his door a slip of paper upon which was written: “Sir, it’s half past eight.” (The Presbyterian Witness, July 9, 1910)

And here’s another one:

“John’s the most absent-minded man I ever saw.” “Why, what’s he been doing now?” “This morning he thought he’d left his watch at home and then proceeded to take it out of his pocket to see if he had time to go home and get it.” The Presbyterian Witness, July 30, 1910.

All we’re missing is the drumroll and the laugh track! Or perhaps the crickets.

If those two jokes didn’t quite convince you just how much those Presbyterians liked to laugh, here’s a poem about laughter found in The Presbyterian Witness on May 28, 1910:

It freshens all the day.

It tips the peaks of life with light,

And drives the clouds away;

The soil grows glad that hears it,

And feels its courage strong

for cheering folks along.

It lingers in the air,

And where its melody is heard

The ills of life depart,

For making the life sweet

By “The Friend”  (and yes, this was the name provided)