Many of the records at the Maritime Conference Archives are minutes from various church bodies. These minutes certainly tell us a lot about the work and activity of a church but it’s hard to find out more about the people themselves. Every once in a while, however, we are able to come across records that provide us with a glimpse into the personality and life of a minister of church member.

Take Rev. Samuel J. Wilson for example. The Archives received some of his personal records last year. We know he was born in 1875 in Ireland. In the early 1900s, he came from Ireland to Canada and was ordained by the Pleasant River Congregational Church at Margaree, Nova Scotia in July 1905. He served at this church from 1905-1907 and then went to the Congregational Church in Sheffield, New Brunswick for a year. After that, not much is known about him but it appears that he ministered at some Congregational churches in Maine, USA and also worked as a businessman in St. Stephen. 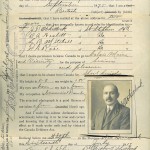 Those are the basic facts, a calling card if you will, but there’s also a lot more to Samuel J. Wilson. For example, he wrote lots of poetry, including a poem addressed to his sweetheart over in Ireland. His poetic talents were even put to use selling fertilizer in St. Stephen, New Brunswick. Wilson was a self-professed Orangeman and a temperance supporter. He was into astrology or at least curious enough to send in money for his astrological reading. He weighed 185 lbs and apparently had “massive feet.” And these are just a few of the interesting facts I was able to glean from his records. You would be surprised what you can find out when you start digging in the Archives! 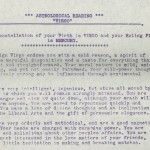 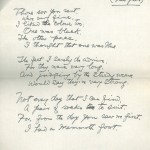